Growth can be more inclusive by pursuing policies that enable improvements in a country’s living standards while sharing gains more equitably across the population. Inclusive growth incorporates a focus on relative – not just absolute – income and wealth inequality, and on well-being, which depends on both monetary and non-monetary conditions, such as access to quality education, employment, housing and healthcare.

Malaysia’s success in alleviating poverty has been achieved despite the absence of an integrated and comprehensive social protection system. Households benefit from near-universal access to electricity, clean water, healthcare and transport, but income support for disadvantaged persons (such as the unemployed, single parents, disabled and elderly) remains ad hoc, insufficiently targeted and inadequate in providing basic living standards (OECD, 2016a).

Malaysia’s social protection expenditure is lower than in all South East Asian countries for which data are available and than in all but a handful of countries in the Asia Pacific region. Public expenditure on social protection as a proportion of GDP typically rises in step with GDP per capita, as observed in OECD countries. Malaysia displays a different pattern (Figure 1). This would be the case even when adding in zakat, a compulsory Islamic charitable mechanism that in 2013 represented over one fifth of the level of government social spending excluding health. 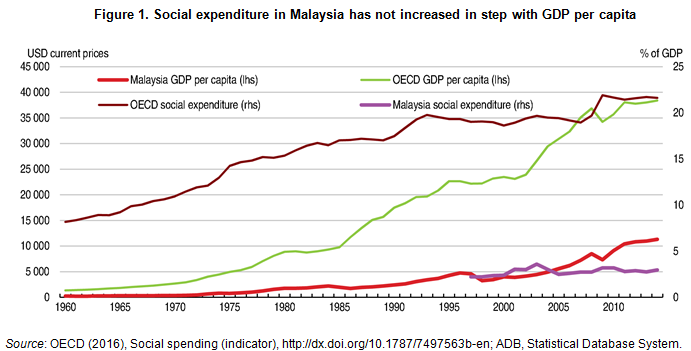 The low level of social protection expenditure is further reflected in the low redistributive power of the tax-and-transfer system: pre and post‑tax and transfer Gini coefficients for income barely differ, like in Turkey (Figure 2). 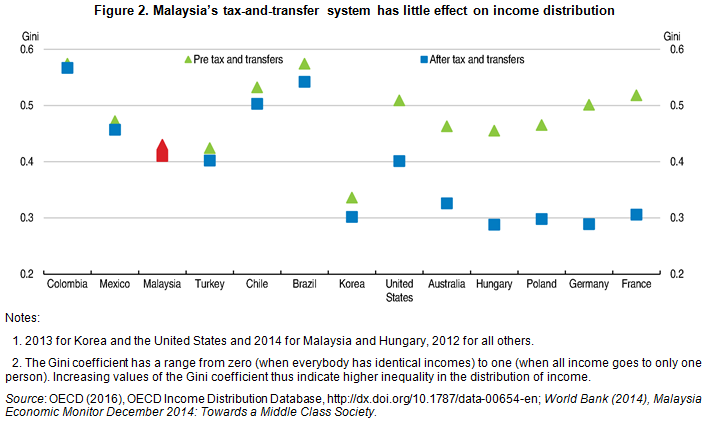 Social expenditure is highly fragmented, being provided through a multitude of small-scale, specific-purpose programmes by a diverse range of ministries. It is essential that Malaysia develop a comprehensive social protection and income transfer system that provides targeted and timely support to those in need, while retaining strong incentives and facilitation mechanisms to maximise labour market participation. This calls for undertaking a comprehensive assessment of social protection needs and optimal strategies to meet them. Malaysia could utilise global best practice toolkits such as the Inter Agency Social Protection Assessments toolkit (ISPA, 2016) and draw lessons from the OECD Development Centre’s work to develop social protection systems in the region (OECD, 2016b).

A key priority is the introduction of an employment insurance scheme that integrates job‑matching services, reskilling and income smoothing to prevent a temporary setback from becoming an entrenched disadvantage. This scheme should also include temporary income smoothing payments to further reduce financial barriers to re-employment and overall income inequality.