Economic growth is strengthening in France, supported by consumption and investment, and the labour market is gradually recovering, as past reductions of comparatively high labour and business taxes are starting to take effect. However, GDP and employment growth are still lagging relative to the euro-area average (Figure 1). As in many other OECD countries, a weakening of productivity gains is limiting the government’s ability to continue providing its citizens with a high level of social protection and good prospects for high-quality jobs and rising incomes. The new government is passing a major labour market reform. It is also reducing business and labour taxes on low wages and plans to strengthen workers’ rights to unemployment benefits, while tightening obligations to accept job offers. It intends to make the pension system more universal by aligning rights across different regimes, and ease access to high-quality vocational training and adult learning. This ambitious reform agenda can make an important contribution to securing stronger and more inclusive growth and job creation.

High levels of public spending, while contributing to low poverty and good health care, requires burdensome taxes that limit firms’ ability to invest and create jobs. The new government has set an ambitious target to reduce public expenditures by three points of GDP by 2022. The recently released OECD Economic Survey of France proposes structural reforms that would help cut inefficient and non-essential spending, while better targeting public money where it is most needed. This includes lowering the relatively high public payroll, by not replacing every public servant who retires, reducing overlap in sub-central governments’ competencies and merging France’s often particularly small municipalities, aligning different pension regimes to increase transparency and reduce administrative costs, and gradually raising the minimum retirement age. In health care, improving prevention, while limiting unnecessary prescriptions and treatments would go a long way in containing spending growth, while preserving and further improving overall good health outcomes. Education spending needs to be better targeted at schools with many struggling pupils and public infrastructure spending should focus on poor neighbourhoods that suffer from poor connection to public transport.

Unemployment is still high, and spells are long, particularly for young people; too many of them are not in employment, education nor training. Those who do work often find it difficult to  begin their careers, as most new hires are on temporary contracts few of whom are transformed into permanent jobs. The ongoing labour market reform aims at facilitating negotiations in small firms and simplifies the governance of firm-level institutions representing employees. Also, the needs of small and medium-sized enterprises (SMEs) will be better taken into account as sector-level agreements will have to include explicit provisions for them. This will allow firms and workers to better adapt their working conditions to their specific needs and makes it easier for small and innovative firms to enter the market and grow, promoting productivity growth. Moreover, labour courts setting indemnities for unfair dismissals will now be constrained by a binding range.  Compared to other countries, indemnities in France are indeed particularly variable, and limiting their range will reduce uncertainty for employers regarding dismissal costs, reducing hurdles to hiring on open-ended contracts. However, the Survey also points out that the quality of France’s labour court procedures needs to improve. They  are unusually lengthy, and judgements are appealed in roughly 70% of the cases. One solution would be to introduce professional judges to support the lay assessors who currently handle the process. France is indeed the only OECD country besides Mexico where such legal actions are reviewed by lay assessors alone.

Too many French adults have weak basic skills (Figure 2). Access to training is hampered by a complex training system that is characterised by a large number of training and financing schemes.  The recently introduced personal training account (compte personel de formation, CPF) is difficult to use and provides access only to a limited number of training offers that differ by sector. The government intends to  implement a national vocational training plan of 15 billion euros.  To maximize the impact of that investment the Survey recommends improving information about providers  by strengthening  the quality label system so that workers become fully aware of the label and can understand it. The CPF should be simplified and give access to all training measures that have obtained a quality label. The number of competing schemes should be reduced to concentrate financing on one measure that works. 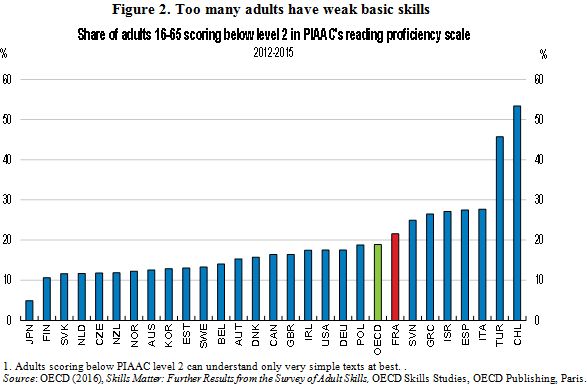