“Equality is a utopia (…) that must be constantly redefined and constantly conquered anew.”

Equality, a long-standing hallmark of Swedish society, carries multiple benefits in terms of economic performance, trust, opportunity and well-being. Income inequality is relatively low in Sweden compared to the OECD average, but a rapid rise from the 1990s calls for new efforts to redefine and re-conquer equality once again. Chapter one in the new Economic Survey is dedicated to understanding and addressing the rise of inequality in Sweden (OECD, 2017).

Top incomes grew strongly from the 1990s, mainly as a result of increasing capital gains and dividends, but the collection of wealth statistics was discontinued from 2007, which makes analysing the underlying causes challenging. In the bottom end of the income distribution, working-age benefits were cut or frozen following the economic crisis of the early 1990s. Decades of slow uprating led to a gradual decline of benefits relative to earnings. Analysing the distributional consequences of different uprating scenarios annually would highlight the consequences of inaction, but leave actual increases at the heart of political debate and decision-making, where it firmly belongs. 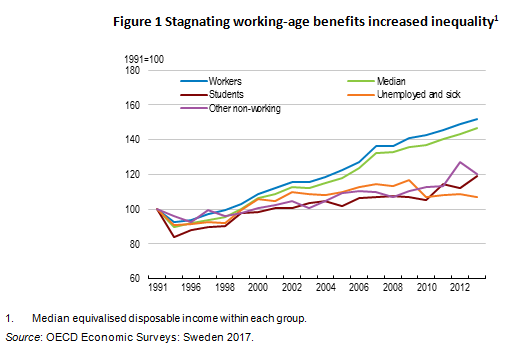 Significant demographic and structural changes, with ageing, more single and single parent households, higher educational attainment, a shift away from manufacturing, and higher, mostly non-labour, immigration, are behind more than 40% of the increase in the Gini coefficient from 1987 to 2013 (Robling and Pareliussen, 2017). These trends increase the importance of redistribution and labour market policies as countermeasures.

One such trend is the increasing number of humanitarian and family reunion migrants, who have lower incomes than natives and less adequate housing. Furthermore, residential segregation leads to school segregation. With low skills compared to natives, partly as a result of lower education attainment, partly due to difficulties with language and culture, many struggle finding employment (OECD, 2015; Bussi and Pareliussen, 2015).  Relatively well-developed integration policies can be further harnessed by learning from successful experiences at the local level, continuing to individually adapt upskilling activities, shortening the time it takes to get residence and work permits, simplifying and consolidating wage subsidy schemes.

Finally, housing market inefficiencies hit the least well-off. The difference in housing conditions between the rich and the poor is high in Sweden. Tightening the generous tax treatment of owner-occupied housing would increase affordability. Easing strict rental regulations while maintaining tenant protection against abuse would increase mobility for those who cannot afford to buy, incentivise rental housing supply and lead to better utilisation of the housing stock. Some prioritisation to municipal housing with well-designed allocation rules could help low-income households and limit residential segregation. 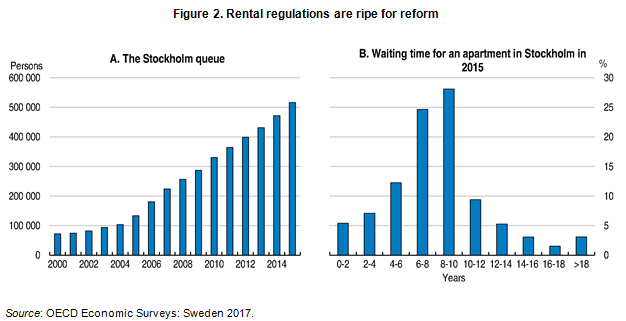