Public spending efficiency in the OECD

The falling ratios of workers to retirees in many OECD countries are jeopardising their old-age pension systems. Similarly, the rise in life expectancy and chronic medical conditions are pushing up health expenditures. Demand for education is also high, as productivity gains will need an increasingly educated workforce to be sustained.

While demand for public expenditure keeps rising, government spending in OECD economies was already at a record high of 45% of GDP in 2014, up from 35% in 1970 and 24% in 1937 (Tanzi and Schuknecht, 2000). Meeting those demands while keeping public spending under control will require improving public spending efficiency. But how efficient is public spending in the OECD exactly?

Efficiency in public expenditure can be measured via Data Envelopment Analysis (DEA) whereby a frontier of best-practice countries is constructed based on input-output data. Distance from the frontier measures potential gains in terms of: 1) increasing output holding inputs constant (output efficiency); or 2) reducing inputs holding output constant (input efficiency). In this post we focus on output efficiency. Input efficiency analysis, and more detailed results, can be found in Dutu and Sicari (2016).

The calculation of efficiency scores for health care is done using life expectancy at birth as a proxy of the health system’s outcomes, and controlling for lifestyle factors and the socio-economic environment. The results show significant room for efficiency gains (Figure, Panel A). For instance, several Eastern European countries such as Slovakia and Hungary could, in theory, raise their life expectancy significantly by simply holding their financial inputs constant while spending more efficiently. At the other end of the spectrum, countries like Japan, Switzerland and Korea are already close to the frontier and have little room for efficiency gains. 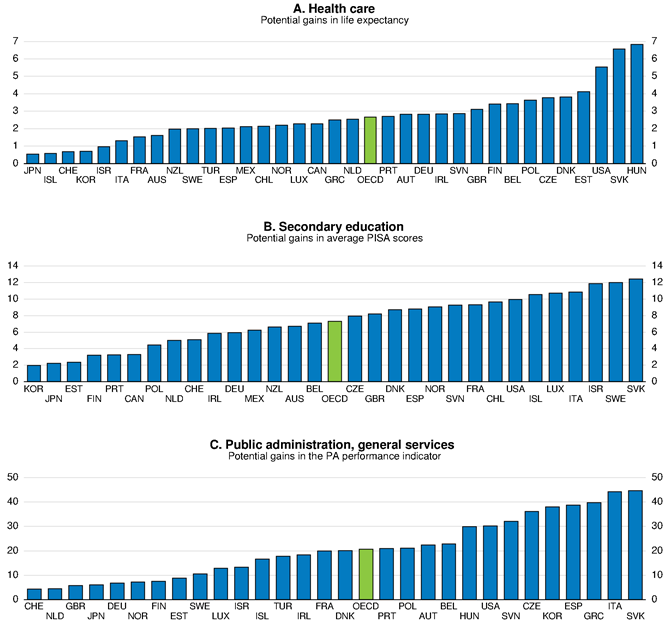 1. For specific details on the variables included in the DEA estimates, as well on specific reference periods, see Dutu and Sicari (2016).
Source: OECD calculations.

Potential gains in output efficiency in secondary education are found to be relatively larger than for health care (Panel B). After controlling for the family background, the synthetic PISA score* measuring students’ performance could on average be increased by as much as 7-8%, if per student PPP-measured spending simply followed best-practice. Similarly, significant efficiency gains are achievable in the sphere of “Public administration and general services” (Panel C), especially in Southern and Eastern European countries.

* Obtained by averaging the country scores across the reading, mathematics and science dimensions.