How does ageing affect income redistribution?

In many advanced countries, the share of citiziens having reached post-retirement age is growing fast. Since elderly rely for a good part on a public pension scheme for income support, population ageing tends to result in more income redistribution, in particular in the form cash transfers. However, insofar as ageing also means a growing share of population in groups that are close to retirement age, but still considered as part of the working-age population, a more interesting question is how this facet of ageing affects redistribution. As we show in a recent paper on “Income redistribution through taxes and transfers across OECD countries” ageing actually tends to reduce income redistribution when the latter is measured as the reallocation of resources between people in working-age to limit the influence of redistribution across lifetime. This is primarily a result of ageing being associated with higher employment rates among seniors.

The purpose of redistribution is to reduce income inequality. Therefore it is natural to measure redistribution as the difference between the Gini coefficients of households incomes before and after personal income taxes and cash transfers.[1] This is done only for the working-age population (age 18-65)  to avoid the influence of public pensions, mostly reflecting that people pay taxes in working-age they then receive back as benefits in retirement age.

But how does ageing then affect redistribution? As Figure 1 shows, the working-age population has been ageing over the last two decades in the sense that the composition has changed towards relatively more seniors and fewer people below age 40. 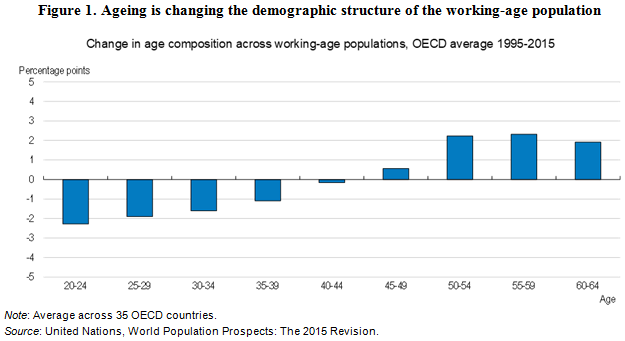 Such ageing of the working-age population tends to produce two counteracting effects on redistribution. It may drive redistribution: 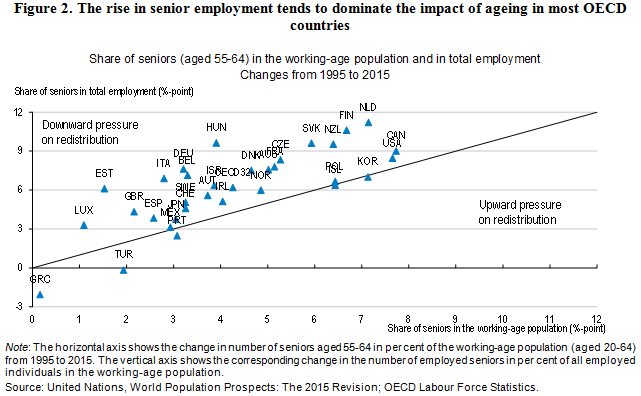 [1] The difference is scaled by the Gini coefficient for households incomes before taxes and transfers to account for cross-country differences in the initial level of market income inequality. See Section 3.4 in Causa and Hermansen (2017) for details. 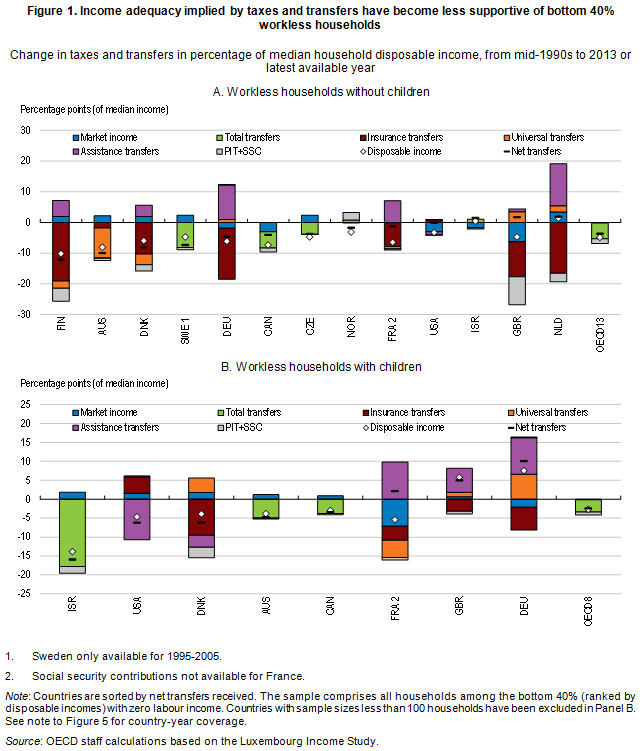 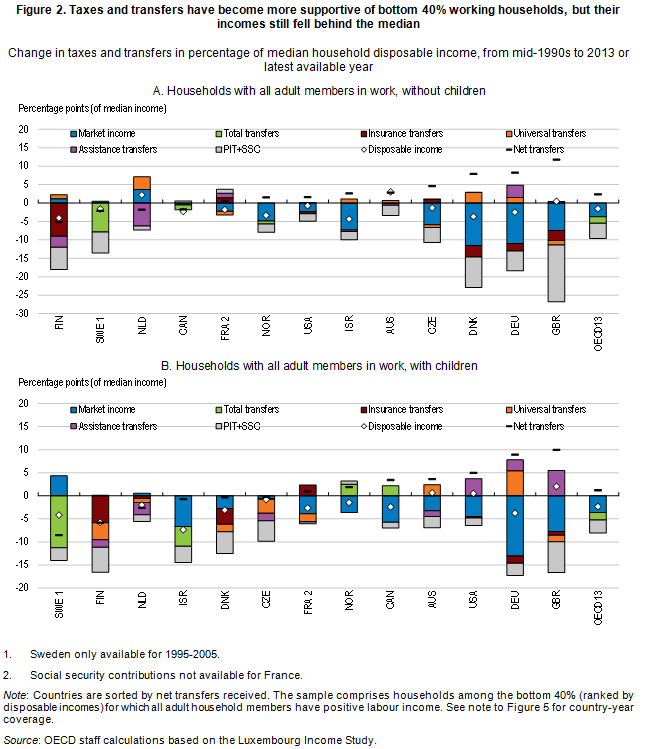 Income redistribution through taxes and transfers across OECD countries

Many OECD countries have been facing a prolonged period of low growth and stagnating income of the poorest. This challenges governments’ fiscal redistribution, all the more so in a context where new forms of work are calling into question the effectiveness of traditional social safety nets and population ageing is putting pressure on public finances. Yet, the system of taxes and transfers  that underpins social protection  is a fundamental pillar of an inclusive growth policy agenda that aims at sharing the benefits of growth more equally. A new OECD report by Causa and Hermansen (2017) (“Income redistribution through taxes and transfers across OECD countries”) takes stock of the extent to which tax and transfer systems mitigate market income inequality today, and how this has changed over a period of rising globalisation and rapid technological change.

Since the mid-1990s, the redistributive effect of taxes and transfers has declined in the majority of OECD countries for which data are available (Figure 1, Panel A). The trend towards less redistribution was most pronounced over the pre-crisis period, and was temporarily reversed during the first phase of the crisis, reflecting the cushioning impact of automatic stabilisers and fiscal discretionary measures. The decline in redistribution was particularly pronounced in some Nordic countries, which are among the most egalitarian OECD countries. Admittedly, the extent of the decline observed in these countries was amplified by high levels of redistribution prevailing in the mid-1990s due to high unemployment. The steadily improving labour market outlook during the subsequent decade reduced the need for redistribution. The inequality-reducing effect of redistribution also declined among the least egalitarian of OECD countries, especially Israel, but also Australia and Canada. Trends in redistribution were more heterogeneous over the most recent decade, with increases in around half of OECD countries, in particular those hardest hit by the crisis (Figure 1, Panel B). 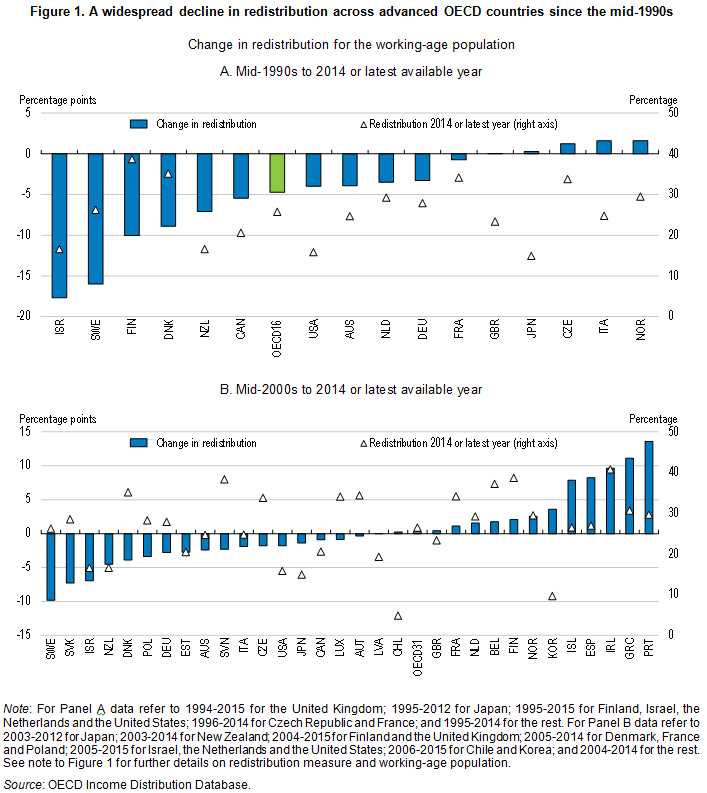 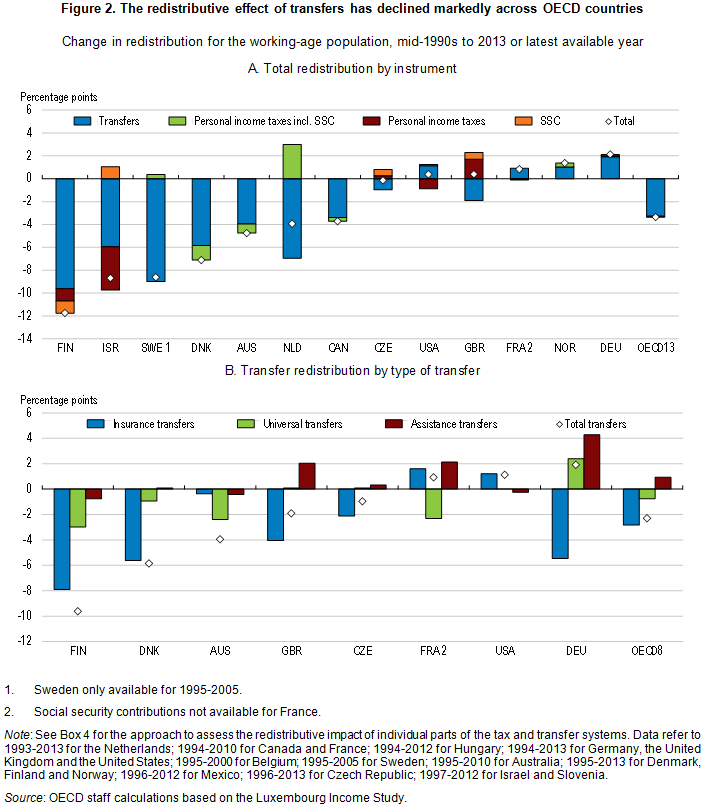 One finding highlighted  in Causa and Hermansen (2017) is a fairly widespread shift in transfer policy from out-of-work to in-work support, at least partly driven by reforms to make work pay, especially for workers with weak labour market attachment. While this is likely to have mitigated market income inequalities by spurring employment growth, it could have contributed to the decline in redistribution. This should not lead to the conclusion that countries have no choice but to trade more efficiency for less equity. The reason is that redistribution policies should be considered as part of broader policy packages to make growth more inclusive. For example, well-designed inclusive growth packages should combine tax and transfer policies to make work pay and boost jobs with policies to improve employability, skill adaptability and wage prospects. To the extent that such packages have not been broadly deployed by OECD countries, potentially reflecting budgetary constraints, reductions in market income inequality induced by such reforms have not been sufficient to prevent disposable income inequality from rising.