Housing is key to wellbeing. Real estate typically forms the most important asset of households and their most important source of debt. Not surprisingly given their correlation with the economic cycle, house prices are also one of the most widely tracked economic indicators. However, despite their importance, including for macroeconomic policymaking, as the 2008-09 financial crisis well illustrated, there are few internationally comparable statistics to show how house price developments vary across regions and cities within countries. This is despite the common understanding that changes in house prices within countries are rarely uniform (e.g. there may be ‘ripple’ effects). Policies that target the ‘national’ therefore may miss differences across regions and in turn add to the geography of discontent. This Statistical Insights describes a new OECD database on national and regional house price indices that aims to fill this gap.

There are significant differences in house price developments across countries…

The bursting of the housing bubble in the United States played a key role in the 2008-09 financial crisis, which rapidly turned into a global recession. Even though real house prices (i.e. adjusted for general inflation) declined in several OECD countries, the extent of declines and subsequent ‘recoveries’ differed significantly across countries (Figure 1a). For example, in 2018, house prices in real terms in Colombia were double the levels in 2005, whereas they remained 40% lower in Greece.

This shows that beyond global factors such as those that drove the financial crisis, country-specific factors also matter. These include population growth, land-use restrictions, real household incomes, real interest rates, mortgage market regulations and supervision, lending patterns (at fixed or variable rates), tax relief on mortgage debt financing, and transaction costs such as stamp duty.

… but also within countries.

A focus on national price developments does not however tell the full story. Significant differences in the evolution of house prices also exist within countries. For example, while real house prices in Spain declined by 40% on average between 2007 and 2013, and then began to recover, in 2019 they remained nearly 50% lower in Navarra but only 15-20% lower in the Balearic Islands, Ceuta and Melila (Figure 1b). In Mexico, most regions show limited variation around the national average, with real increases ranging from around 10% in the Hidalgo region to around 30% in Yucatan between 2005 and 2018 but this is not universally true. The Federal District for example, which includes Mexico City, saw real prices rise by more than 70% over the same period (Figure 1c). In the UK, Northern Ireland and the region of London show much wider fluctuations in house prices than the rest of the country (Figure 1d).

Figure 1: Real house price developments across OECD countries,
and within Spain, Mexico and the United Kingdom

In recent decades, some large cities have seen significant growth in house prices.

In recent decades, an ‘urban resurgence’ (Glaeser 2020), driven in part by better-paid jobs within cities, the willingness to live closer to them, and better access to cultural amenities has led to gentrification and above (national) average house price growth in some of the largest cities. For example, house price inflation in Inner London was around double that of the rest of the United Kingdom between 1995 and 2019. Similarly, house price inflation in Paris between 2005 and 2019 was around 50% higher than in the rest of France (Figure 2).

Nevertheless, this does not exclude large differences across large cities within the same country. For example, the OECD database shows that house prices in the metropolitan area of Los Angeles have grown twice as fast as in the metropolitan area of Chicago since the mid-1990s. Moreover, Glaeser et al. (2012) also emphasise differences in house price developments within cities, with typically faster price growth in recent years in neighbourhoods closer to city centres.

Notwithstanding the fact that economic policy may be suboptimal if one ignores house price heterogeneity within a country, the impact of this heterogeneity on housing affordability may act as a barrier to mobility to households seeking employment in parts of the country where labour demand is higher but cannot always afford to do so due to differences in house prices.

In the years to come, it will be important to assess whether a more systematic use of digital tools to telework following the COVID-19 pandemic will reverse the gentrification of cities and ‘urban resurgence’ phenomena. Granular data on house price developments within countries and cities will become even more relevant for doing so.

House price indices are index numbers measuring the rate at which the prices of residential properties (flats, detached houses, terraced houses, etc.) purchased by households change over time. These indices adjust for quality differences between dwellings sold in the current period, relative to the reference period. In other words, they aim at measuring pure price changes. They cover both new and existing dwellings whenever possible, independently of their final use (to live in or for rent). These prices include the price of the land on which residential buildings are located and they are compiled by official statistical agencies following international statistical standards.

Calculating real house price growth, i.e. controlling for national general inflation, allows for a more meaningful comparison of house price dynamics across countries. The deflator used is the deflator of consumption expenditure of households, compiled according to the 2008 System of National Accounts (SNA). It is important to note that the deflator is typically only available at national level, meaning that the same deflator is used for all regions within a given country, and therefore, that heterogeneity in consumer price dynamics across the different regions of a country is neglected.

Australia’s cooling housing market; is the economy at risk?

Australia’s housing market is a source of vulnerability. Prices have more than doubled in real terms since the early 2000s and household debt has surged. The market has started to cool over the last year, with prices falling most notably in Melbourne and Sydney. So far, data point to a soft landing without substantial consequence for the overall economy. Nevertheless, risk of a hard landing remains.

To date the decrease in house prices has been gradual. Prudential measures taken by the Australian authorities restricting certain types of housing credit have played a role. So too has a pick-up in new housing supply and construction activity remains elevated. Furthermore, some evidence suggests that Australia’s house prices have not been hugely overvalued; the IMF has estimated that as of Q3 2017 prices were above equilibrium by only between 5 and 15% (Heilbling andLi, 2018).

Nevertheless, risk of a macroeconomic downturn from the cooling housing market remains. Not withstanding the estimates that Australia’s market is not greatly overvalued, house prices could fall more substantially. Should this happen, household consumption could weaken. Households would cut their spending due to lower housing wealth and due to increased economic uncertainty generated by downturn. Households would also reduce expenditures related to the purchase, sale and maintenance of housing (such as spending on renovation and interior decoration). Sustained decreases in house prices would also weaken construction activity. Weakened aggregate demand could in turn lead to losses on loans to businesses, putting stress on the financial sector.

The OECD’s 2018 Economic Survey of Australia recommends authorities prepare contingency plans for a severe collapse in the housing market. These should include the possibility of a crisis situation in one or more financial institutions.

In real terms, house prices in New Zealand increased more than in any other OECD country between 2010 and 2016 (Figure 1). While house price increases have supported economic growth through wealth-induced consumption growth, they have also created a number of social and economic problems. Housing affordability has been undermined, particularly for those with low incomes: housing costs for the bottom fifth of households reached 54% of income in 2015, up from under 30% in 1990. Driven by mortgage growth, the ratio of household debt to disposable income now exceeds the level recorded prior to the global financial crisis and is high compared with other OECD countries (Figure 2). This raises financial stability risks. House price increases also undermine productivity growth by inhibiting people from moving into economically successful, highly productive urban areas. 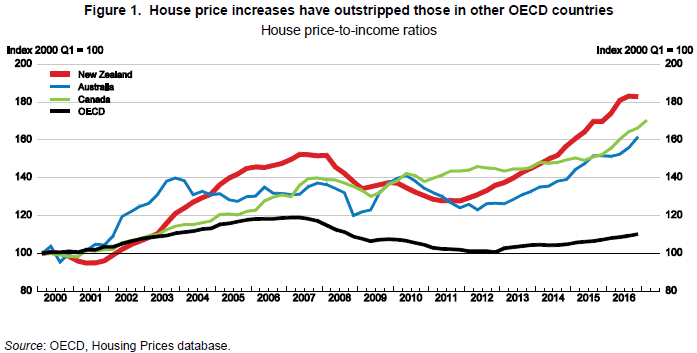 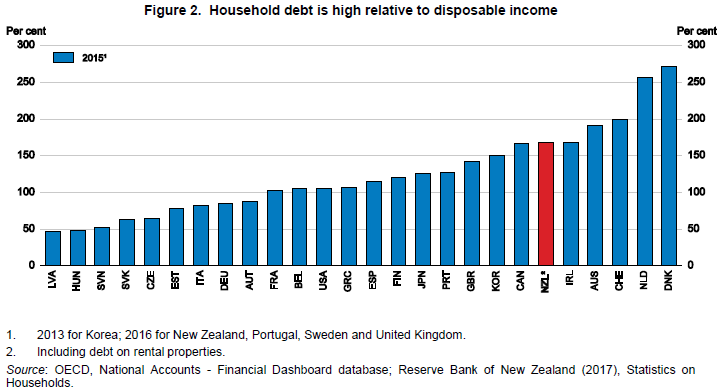 Price increases have been most pronounced in Auckland. Around half of all new migrants settle in Auckland, exceeding its (one third) share of the national population. Since 2008, new housing construction in Auckland has failed to keep pace with population growth. Prices in the rest of New Zealand, on the other hand, have risen despite little or no increase in the population-to-dwelling ratio. Throughout the country, record low interest rates have magnified house price increases.

The long-term solution, for Auckland in particular, is to address supply constraints. The recent Auckland Unitary Plan will allow greater densification and some expansion of urban development limits. However, insufficient infrastructure has constrained the extent to which densification is possible in central parts of Auckland. As in other parts of the country, infrastructure provision is primarily the responsibility of local governments, which face financial constraints and weak incentives to invest in amenities to facilitate growth. Options to broaden funding sources for public infrastructure should be explored, including more user charging, targeted property taxes, more cost-reflective developer contributions, sharing in a tax base linked to local economic activity and further recourse to alternative delivery models such as public-private partnerships. Reforms to the urban planning system are also needed – recommendations from the OECD’s Environmental Performance Review and the Productivity Commission’s Inquiry into Land Use Planning should be considered in order to deliver a more responsive and efficient planning system.

Relieving supply constraints takes time, however, so demand-side measures are also important to address financial stability risks. The Reserve Bank has progressively tightened restrictions on loan-to-value ratios, constraining the maximum amount that banks can lend to most customers. House price increases have moderated since the last round of tightening in October 2016. Debt-to-income restrictions, which complement loan-to-value ratios by limiting further debt as house prices increase relative to incomes, may be necessary if house price increases resume, and should be added to the Reserve Bank’s toolkit following analysis demonstrating that benefits would outweigh costs.