South Africa needs bold structural reforms to lift economic growth. The coronavirus crisis, flooding in Kwa-Zulu Natal and widespread electricity cuts have weakened an already fragile economy (Figure 1). GDP growth is projected to slow to 1.8% and 1.3% in 2022 and 2023, respectively. The war in Ukraine is creating additional risks: on the one hand, rising commodity prices are prolonging the commodity boom cycle, but, on the other hand, higher inflation is denting purchasing power. The social distress relief grant, put in place during the pandemic and covering up to 10.5 million individuals, has helped mitigate the effects of the crisis and inflation on poverty, but may not be sufficient if the economy does not grow faster: unemployment stood at 34.5% in the first quarter of 2022.

Weak growth performance has deep roots. South Africa’s growth underperformed during the past decade: GDP per capita was already lower in 2019 than in 2008, and over the period 2009–2019, GDP growth averaged only 1.1%. Weak economic growth is mostly explained by declining productivity due to deteriorating infrastructure, weak telecommunication networks and low investment. Failing electricity generation has become the main bottleneck to production and concern for investors. Skills shortages remain a constraint in several sectors. Adding to the issue, there is limited fiscal space to cope with high public spending pressures, notably for infrastructure projects, electricity generation, education and also social transfers. The debt-to-GDP ratio stands now at 70% of GDP.

Figure 2. Productivity is lagging behind

GDP per hour worked in constant USD PPPs, 2021 or latest

The recent COVID-19 pandemic and resulting containment measures have hit hard the economy and in particular tourism. Yet, the sector has good potential to support the South African economy and contribute to employment growth post-COVID-19. As tourism is a labour intensive sector that can also bring foreign currency into the country, it was identified as a priority area by the South African government. Between 1995 and 2017, international tourist arrivals doubled while employment directly related to tourism tripled. To ensure that the sector continues to play a key role in the economy following the COVID-19 pandemic, a recovery plan is being finalised focussing on stimulating demand, protecting and renewing supply and strengthening enabling capability.

South Africa has rich and diverse natural and cultural assets. Still, tourism development has been challenged by the country’s geographic location and perceived safety and security issues. As the country is a long-haul destination for many large source markets, good accessibility and international openness is key to expand international tourism. Following the COVID-19 crisis, a managed re-opening is envisioned, followed by growth interventions to reclaim market share and drive long-term growth. Although South Africa’s air transport infrastructure is well developed compared to African competitors (see Figure 1), the country lags far behind in terms of international openness due to burdensome visa regulations for tourists. Tourism strategies to attract international visitors therefore have to reduce the administrative barriers and uncertainty related to visa requirements to remain globally competitive.

Once travel restrictions due to the COVID-19 pandemic are eased, potential tourists could still be deterred from selecting South Africa as a destination based on concerns around safety and security. South Africa continuously performs poorly with respect to safety and security indicators. As these indicators do not capture tourism-related incidents, credible and up-to-date information on safe areas that are easily accessible for domestic and international tourists alike should be provided. Such information could be complemented by greater visibility of safety and police personnel in main tourist areas as proposed in the recently finalised safety monitor programme. This is a welcome step as it could reduce crime against tourists, make them feel safer and portray a more positive outlook to potential tourists. A general reduction in crime will also improve the well-being of the local population.

Increasing tourist arrivals is necessary for tourism development, but the strength of the relationship between tourism and economic growth depends on the economic integration of the tourism industry in the local economy. In order to achieve inclusive growth, the economic benefits of tourism must also spread geographically –beyond mature destinations in South Africa – to create economic opportunities in less travelled and less prosperous regions. This is especially important in a country that is as spatially segregated and unequal as South Africa. To promote the geographic spread of tourists into more remote or distressed areas requires better domestic transport infrastructure. Moreover, municipalities need sufficient capacity to plan for sustainable tourism development and to provide supportive infrastructure for basic services and tourism-related activities. As unchecked tourism growth can increase the pressure on environmental resources and on housing markets and increase inequality, tourism policies need to be planned carefully and in a holistic way. Policies that are taking into account the interdependencies across different sectors and are allowing for input from different levels of government will not only create a more enjoyable visitor experience, but will also contribute to better living conditions for residents in the local tourist destination.

South Africa: it is time to rekindle the economy

Growth is recovering but inequality remains persistent. Growth is projected to reach 1.5% in 2018 after many years below one percent or negative in per capita terms. Low growth and high unemployment have adversely affected the well-being of South Africans. Since 2010, inequality, measured by the Gini coefficient at 0.62, has almost stagnated withering the social contract in a context of policy mistrust (Figure 1). 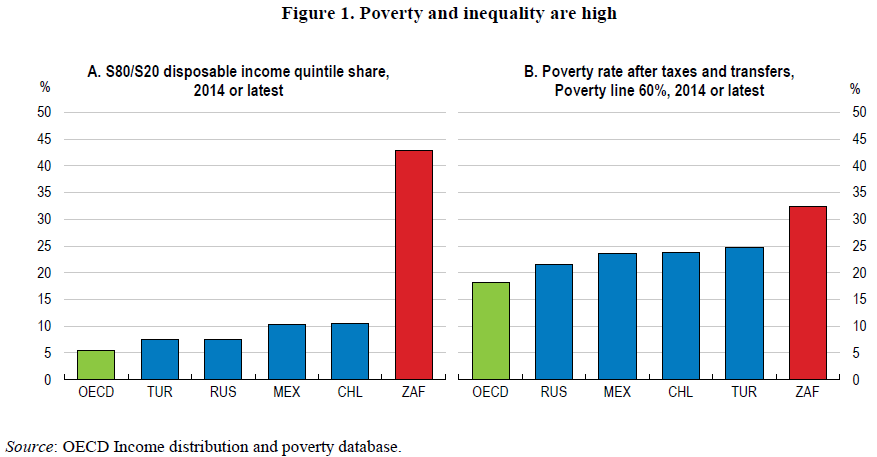 As pointed out by the 2017 OECD Economic Survey of South Africa, the weak growth reflects lacklustre investment and continued low business confidence and the impact of high unemployment, moderate wage increases and persistent indebtedness on sluggish household consumption (Figure 2).

Low growth and weak fiscal discipline contributed to rising public debt burden — from 41% in 2012 to 53% of GDP in 2017. The shortfalls in meeting fiscal objectives, policy uncertainty and corruption concerns in turn led to the downgrading of the government bond ratings to sub-investment level by two major rating agencies in 2017.  This makes it harder to meet the large social needs of much of the population. 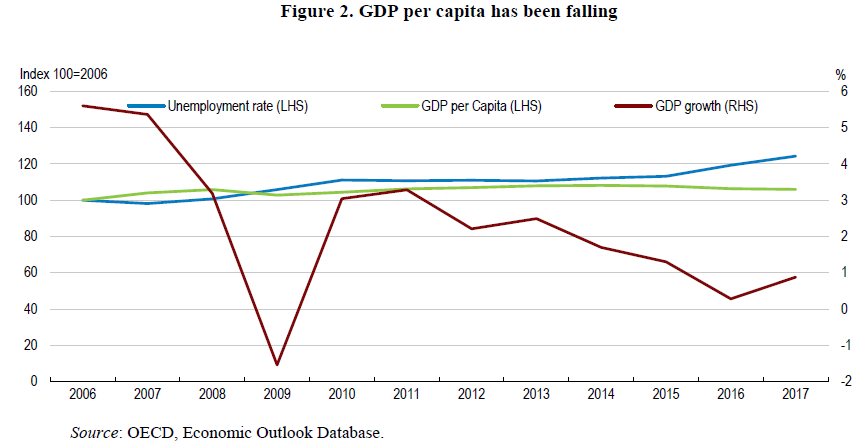 The election of a new political leadership should brighten the outlook. Business and household confidence are up. Indeed, after three years of contraction, private investment is now expected to drive growth. But, growth perspectives remain too low to create enough jobs and generate enough government revenues for spending and debt reduction, while social and infrastructure needs are high.

In the short run, a more accommodative macroeconomic policy mix can boost growth. Inflation has come down throughout 2017 and, at 4.4% in January 2018, it is in the middle of the Reserve Bank’s target band. Interest rates can now be further reduced to amplify the investment pick up. Smoothing the pace of fiscal consolidation could further sustain demand and thus contribute to growth acceleration. In a low growth era, fiscal consolidation is detrimental to consumption demand, although reassuring for investors (Blanchard et al., 2013; Sutherland et al., 2012). South Africa made limited progress in fiscal consolidation over the last five years as growth kept falling.

Along with slower consolidation, budget reallocation toward more growth-enhancing investment should continue. Limiting wage growth in the public sector and subsidies and transfers to state-owned enterprises would create fiscal space for infrastructure and social investment. 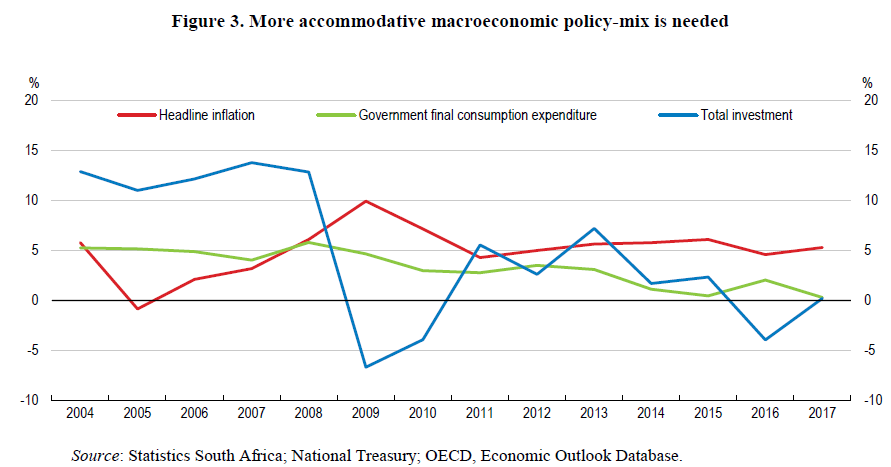 Bold structural reforms are needed to increase potential growth in a longer perspective. OECD South Africa Economic Surveys (2013, 2015) have pointed to many growth boosting reforms: broadening competition in the economy, limiting the size and grip of state-owned enterprises (SOEs) on the economy, and improving the quality of the education system. Important input and technology sectors such as telecommunications, energy, transport and services in general should be opened up to more competition. In particular, telecoms or the airline company, which are in markets with enough competition could be privatised. Moreover, South Africa lacks a proper urban transport system. Putting in place a national plan to expand public transport and allowing more private operators would reduce the cost of transport on the budget and raise well-being.

Job creation remains a major challenge for the quarter of workforce without jobs. The 2017 OECD South Africa Economic survey found that boosting entrepreneurship and growing small businesses can play an important role in creating jobs. Steps have been taken to ease starting a business, but red tape remains a burden. There is room to reduce harmful product market regulations and restrictions to entrepreneurship and entry in professional services. The quality of the education system and lack of work experience contribute to gaps in entrepreneurial skills. Policies should provide more financial and non-financial support for entrepreneurs and small businesses. But, a lack of co-ordination and evaluation hampers effective policy-making.

Greater regional integration within the Southern African Development Community (SADC) could provide new opportunities for growth. Despite large growth potential, economic integration in the sub-region has not advanced much. Intra-regional trade in the Community is only 10% of total compared to about 25% in the ASEAN or 40% in the European Union. Better implementation of SADC protocols and agreements would advance integration and create jobs. Reducing non-tariff barriers by improving customs procedures and simplifying rules of origin would reduce trade costs in the region. Weak infrastructure and institutions and barriers to competition limit industrial development. More ambitious and effective infrastructure and investment policies are necessary at the regional level.