Statistical Insights: Purchasing Power Parities – not only about Big Macs 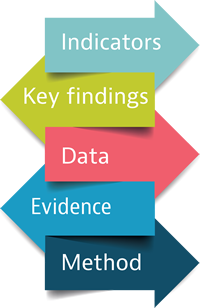 All travellers know that the prices of goods and services vary between countries. In order to capture these price differences, Eurostat and the OECD collect data on the prices of identical goods and services in their member countries, and compile “Purchasing Power Parities” (PPPs) – conversion rates that neutralise price differences between countries. The collection spans hundreds of products and allows PPPs to be calculated for various classes of goods and services, and for macroeconomic aggregates such as gross domestic product (GDP). PPPs help economists and other users of statistics who want to compare GDP, income and consumption across economies with a proper adjustment for price differentials, in order to better assess the size of economies, productivity and material well-being.

The Big Mac index from The Economist magazine is a well-known example of an international price comparison of a product with similar characteristics across countries. In its latest edition (January 2017), this price comparison shows for instance that the average price of a Big Mac is 5 dollars in the United States and 4 euros in France. So the “Big Mac PPP” between France and the US is the ratio of 4 euros to 5 dollars (or equivalently 0.8 euro to the dollar).

Price relatives vary from product to product, so many products must be sampled to construct PPPs for entire economies

Because price relatives vary from product to product, the OECD and Eurostat collect prices on around 2,500 products. This allows PPPs to be constructed for different groups of products, and to compare price levels, once the prices have been converted into a single currency. This is illustrated in Figure 1, showing how prices for different product groups differ across countries.

The top part of Figure 1 shows that the prices of durable goods (e.g., cars, TVs and computers) vary less between countries than the prices of services (e.g., housing, education and health). This is because durable goods are frequently traded across countries, which tends to equalise their price levels. On the other hand, services are often purchased locally and are less traded across countries, thus making it possible to have larger price differences across countries. The comparison shows that services tend to be more expensive in high-income countries (e.g., Switzerland) than in lower-income countries (e.g., Mexico). This is the so-called Balassa-Samuelson effect: the higher productivity in advanced countries for the production of tradeable goods leads to higher wages across all sectors in these countries. Since cross-country differences in services productivity are smaller than in tradable goods productivity, these higher wages lead to higher services prices in advanced countries. 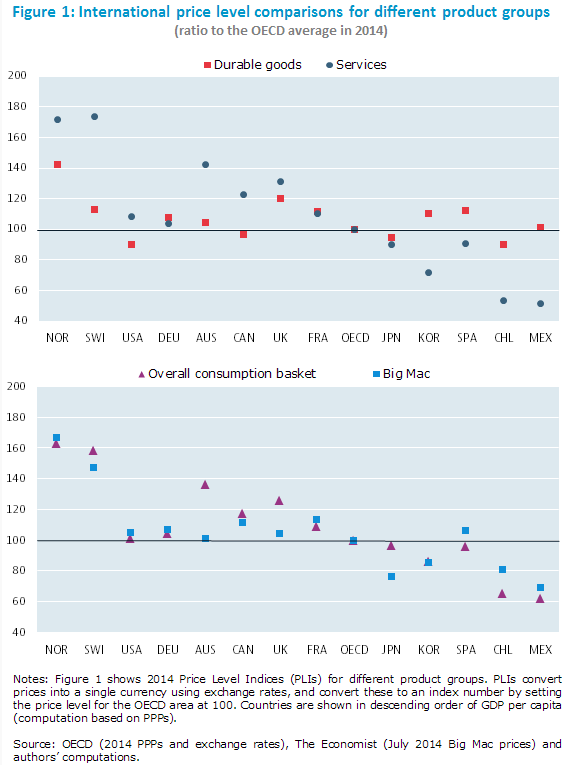 Using the Eurostat-OECD PPPs is the best way to compare macroeconomic aggregates across OECD countries: better than using exchange rates or PPPs based on single products

Perhaps the most intuitive way to compare macroeconomic aggregates across countries when they are expressed in different currencies is to use exchange rates. However, such comparisons do not account for the fact that prices are different across countries, even if expressed in the same currency. Making it possible to adequately adjust for price differentials is precisely the purpose of PPPs.

Figure 2 shows that conclusions derived from international comparisons of per-capita household final consumption, a useful indicator of material well-being, vary significantly depending on whether exchange rates or PPPs are used to convert consumption in national currency to a common unit. In 2014, the differences reached up to 70% for Norway, where average consumption prices were well above the OECD average (see Figure 1). The difference between measures based on PPPs and relative Big Mac prices is usually lower. Nevertheless, and consistently with Figure 1, measures based on relative Big Mac prices tend to overstate consumption per capita in high-income countries and to understate it in lower-income countries, as compared to measures based on PPPs which take into account the whole range of goods and services consumed by households. 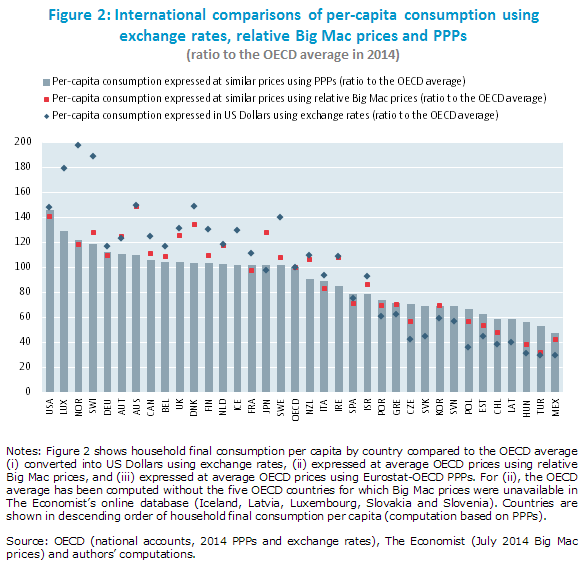 Purchasing Power Parities (PPPs) convert different currencies to a common currency and, in the process of conversion, equalise their purchasing power by eliminating the differences in price levels between countries. Thus, when GDP or consumption values are converted to a common currency with PPPs, they are valued at the same price level and so reflect only differences in the volumes of goods and services purchased in the countries. In their simplest form, PPPs are nothing more than price relatives that show the ratio of the prices in national currencies of the same good or service in different countries. For example, as mentioned in the text, if the price of a Big Mac is 4 Euros in France and 5 Dollars in the United States, then the PPP for Big Macs between France and the United States is the ratio of 4 Euros to 5 Dollars, or 0.8 Euro to the Dollar, meaning that for every Dollar spent on a Big Mac in the United States, 0.8 Euro would be spent in France to obtain the same burger. If the currency exchange rate is one Euro to the Dollar, it can be concluded that Big Macs are cheaper in France than in the United States. The OECD and Eurostat compile PPPs for large baskets of goods and services.

Note that the Eurostat-OECD PPPs are not suitable for gauging the under- or overvaluation of currencies since PPPs cover the whole range of goods and services produced or consumed in an economy, including many non-tradeable ones. Furthermore, currency exchange rates are also affected by capital movements.

The OECD database on PPPs is available on OECD.STAT and includes the following datasets:
> Annual PPPs and exchange rates: this dataset contains annual PPPs for GDP, household actual individual consumption and final consumption expenditure, as well exchange rates for OECD countries and some non-member economies.
> 2014 PPP benchmark results: this dataset contains the detailed results of the latest (2014) Eurostat-OECD price comparison for the 47 countries that participated in the 2014 round of the Eurostat-OECD PPP Programme. Similar detailed results are also available for 2011, 2008 and 2005.

In addition, The Economist’s online database contains local Big Mac prices in up to 56 countries from 2000 to 2017.