Ireland…trading in the global talent pool.

Passing through Dublin airport’s sparkling, spacious Terminal 2, sprinkled with bi-lingual English, Irish signs is a fine experience – it’s a modern, global emporium but with a very Irish flavour as anyone partial to a Guinness in departures can attest to. On arrival before you know it, a phalanx of escalators and travellators have whooshed you to the immigration hall. Standing in the non-EU citizens line gazing across at the streaming mobs of EU passport holders, strangely you can feel almost a little exclusive with your own little gateway to Ireland. The other thing you notice is that a good chunk of the non-EU citizens line are young tertiary students, coming to Ireland to further build their educational achievements. Many others in-line are already experienced professionals. This is migration, a phenomena Ireland has experienced for hundreds of years, 21st century style.

Following the severe banking and fiscal crisis 2008-2011, the Irish economy is again growing at a blistering pace. At 7.8% per annum in 2015 it was the fastest growing economy in the OECD for the second year running. By historical norms rapid growth after a banking-crisis-related recession is unusual. As I argue in the January 2016 OECD Observer, the swift expansion is thanks to Ireland’s huge pool of foreign investment and success in the third great globalisation wave. A key ingredient of this success is Ireland’s capacity to attract and integrate skilled migrants and so far it’s doing quite nicely. It may be a cliché but the Irish people really are loquacious and welcoming. That may be one of the reasons why Google brings staff to Ireland, not just to work in Dublin, but also to train for its offices worldwide.

It is true that in the wake of the crisis, mass immigration turned into a mass exodus. The economic recovery has seen this start to turn around but at the trough in 2012 net migration reached -34000 per annum (0.75% of the population). A good chunk of those leaving were prime age workers. The big concern with this is that Ireland is suffering a “brain drain”. However the data presented in the latest OECD Economic Survey of Ireland suggest that rather than “brain drain” Ireland exhibits “brains exchange”, a large proportion of emigrants and immigrants are well qualified. Skilled immigrants complement Ireland’s well-qualified workforce with “hard-to-classroom-learn” capabilities, such as native speaker-level ability in foreign languages. Migrants also allow Ireland to draw on a wider range of education and experiences than a small economy, even with high quality educational institutions, can be expected to provide. Ireland’s large stock of foreign investment is not just there for low corporate tax rates. The ready availability of a global talent mix is an important part of the attractiveness of Ireland to the world’s most innovative multinationals.

More than half of immigrants are tertiary qualified 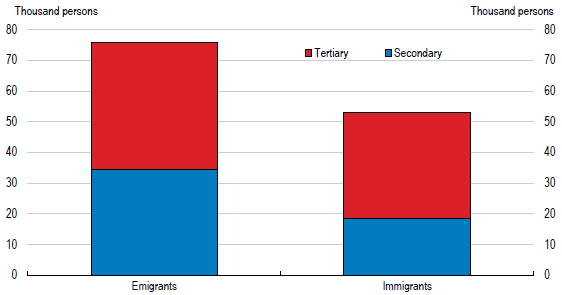 Large migration flows can have important implications for trends across the economy and vice versa: large migrant flows can push around housing markets, or fast rising rents and houses prices, as have been occurring recently in Dublin, could discourage them. The system of work permits and qualifications must recognise that to succeed in a global market Irish firms need to be able to draw on a global talent pool. The policy framework should be fine-tuned to deal with these realities and foster an economy and institutions flexible enough to cope with sizeable migration flows.

Ireland is a high-home-ownership country for many reasons but one of them is that rental accommodation has traditionally often been of poor quality. What is required is a more developed rental market and high quality apartments in city centres where many young, educated migrants want to live and work. Government should carry through on plans to densify city centres and height restrictions should be eased from three or four stories as part of this…think the seven stories of Paris…hardly ugly is it?

The government has improved work permit processing but could do more on qualifications recognition. It could also give non-EU student graduates more time to find a job. This is a rich potential talent pool, combining education and skills from Ireland and their own home countries. And training in Ireland is a perfect platform to integrate successfully from. Ireland has invested in these people, why let that handsome return walk out the door?

The refugee crisis: a challenge but also an opportunity for improving policies to integrate immigrants into the Dutch labour market

The ongoing refugee crisis in Europe has particularly affected the Netherlands. Asylum requests surged in 2015 to nearly 60 000 (Panel A), more than three times the yearly average of 2010-14. This is a significant challenge for the authorities, who need to provide decent housing and help these people finding a job for the time they will stay in the Netherlands as refugees, which could be much longer than expected. Getting work is key for refugees to develop social contacts and economic independence, and acquiring new skills could be helpful for those refugees who eventually return to their own country. Therefore, good policies to facilitate the labour market integration for migrants are critical.

The past record of integrating immigrants is mixed. Although at about the OECD average, the skills of first- and second-generation immigrants are well below those of natives and below those of immigrants in the best performing OECD countries (Panels B and C). In parallel, the gap in labour force participation—those who have jobs or are looking for a job—between first-generation immigrants and natives is the largest in the OECD (Panel D). Many policies that would support job prospects of immigrants would also benefit refugees. Studies of past inflows of refugees show that the proportion of those of working age participating in the labour market is around 45% after being five years in the Netherlands (Vluchtelingenwerk, 2014), which is much lower than the 80% of natives.

Skills and labour market outcomes of immigrants are weak 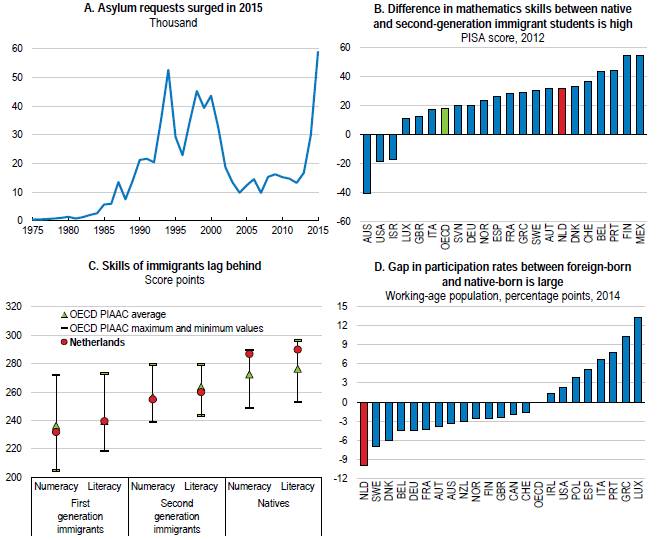 The 2016 Economic Survey of the Netherlands  highlights the following reforms for improving the labour market integration of immigrants, which could also benefit refugees:

Raising the quality of early childhood education and care would help immigrant children, including by improving language proficiency. Stepping up training would provide teachers with the tools to work with students with disadvantaged backgrounds, and reflecting such skills in wages would attract more qualified teachers. Raising student mobility between tracks at secondary schools would foster the development of skills, including for students with immigrant background, and would avoid those with low socio-economic background being trapped in low-qualified jobs.

Better recognition of foreign qualifications and informal skills would help immigrants to find work that matches their skills. Creating programmes that combine work experience and on-the-job training beyond formal education, especially for immigrants with low qualifications, would help them to demonstrate and upgrade their informal skills. Developing language courses would also support access to jobs.

Further lowering the cap on severance payments would make permanent contracts more attractive to employers, which would help refugees and immigrants to find jobs and to support their skills because permanent work tends to come with more skill development. The government has recently increased the earned income tax credit for lower income-earners, which is welcome. Further reduction of effective tax rates on labour income would sharpen incentives to get a job. Reinstating an equal employment policy would help to overcome discrimination on the basis of race or ethnicity.

Whereas the refugee crisis poses an immediate challenge, it also provides an incentive to improve labour market integration policies of immigrants. This would result in better job prospects benefiting all parties involved, the migrants and the Netherlands.