On the revenue side, the empirical analysis uncovers an interaction between increased economic integration and the capacity of personal income taxes to reduce income inequality. Indeed, the results suggest that stronger trade ties across countries have made a given level of tax receipt through personal income taxes less effective at reducing income inequality. The estimated marginal effect of the personal income tax to GDP (PIT-to-GDP) ratio on redistribution thus depends on the degree of countries’ openness (Figure 1): for around half of OECD countries, the effect of the PIT-to-GDP ratio on redistribution is significantly positive but this effect declines with openness levels. For a country at the OECD average level of trade openness, a one percentage point increase in the PIT-to-GDP ratio is associated with a 2% increase in redistribution. For the countries for which such effect is statistically significant, it ranges from 3.7% (USA) to around 1.5% (Korea). 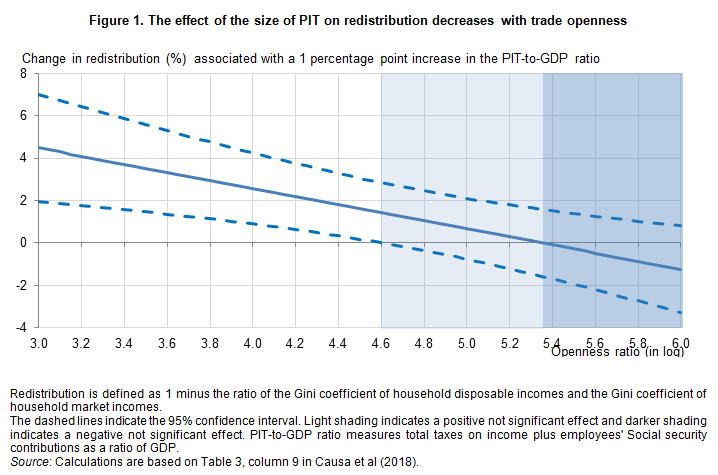 For a given overall size of the tax and transfer system, the estimation results suggest that changes in specific tax and transfer instruments have contributed to the decline in redistribution. Most important among these are:

At the same time, not all policy changes went in the direction of reducing redistribution: the decline in redistribution has been partly mitigated by progressive family-friendly policies, such as widespread increases in spending on early education and childcare, as well as by tax cuts to low wage earners.

These estimates are used to simulate the income redistribution effect of selected tax and transfer reform scenarios, taking into account the countries’ relative starting point in each policy area. Transfer reform scenarios deliver larger effects than tax reform scenarios. The scenarios consistently point to major redistribution gains in countries where social spending on working-age population is relatively low and/ or weakly targeted to low-income households (Figure 2). Increases in long-term unemployed- related transfers to married couples deliver major redistribution gains where these transfers are low or non-existent  (e.g. Chile, Greece, Italy, Turkey and the United States)  The magnitude of these effects reflects the large implied size of the simulated reforms for these countries and should therefore be interpreted in light of alternative policy objectives, in particular efficiency objectives in terms of job search incentives, alongside budgetary constraints.  Still, those same countries that exhibit comparatively low passive support for the long-term unemployed tend to also exhibit comparatively low active support. As a result, policy packages that would combine more generous cash transfers with more effective activation and training for jobseekers would likely meet equity and efficiency objectives. The United States and Turkey would also boost redistribution by increasing spending on early education and childcare; and so would Mexico and Japan. This would not only increase redistribution but also help narrowing gender gaps and curbing child poverty. Reforms to enhance access to quality childcare for disadvantaged families are likely to maximise policy synergies between efficiency and equity. 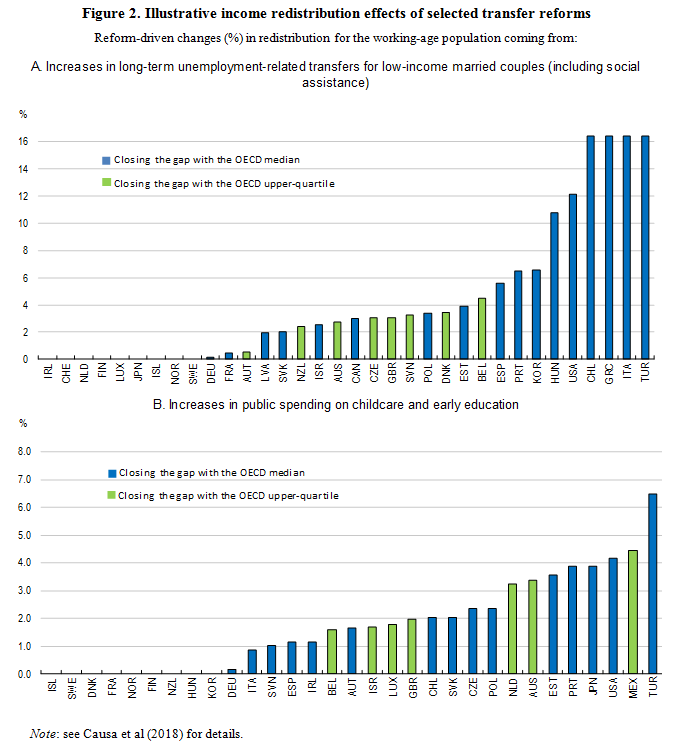