Getting stronger, but tensions are rising

The global economic expansion is strengthening. Global growth is projected to increase from 3.7% in 2017 to around 4% in 2018 and 2019 in our latest Interim Economic Outlook. In many advanced and emerging G-20 economies, the growth prospects for the next two years have improved. Global trade and investment are growing faster, accompanied by robust job creation. Fiscal stimulus in the United States and Germany will further boost short-term growth. Commodity exporting emerging market economies are recovering on the back of stronger commodity prices and firmer global demand. Inflation remains low, but is likely to rise slowly as labour markets tighten. 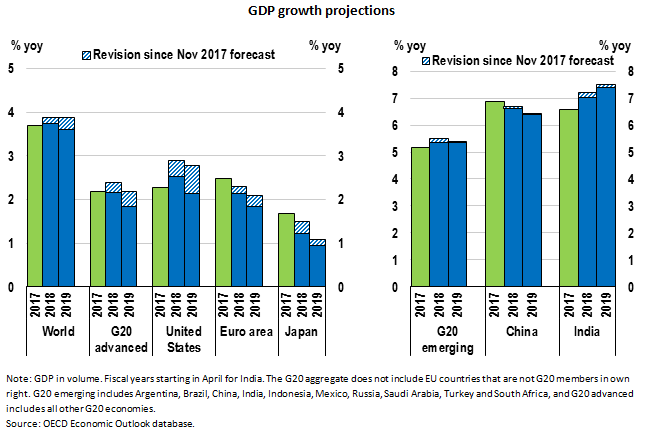 This is welcome news. However,  there are also new tensions and new policy challenges. As the expansion progresses, monetary policy support will be reduced gradually, albeit at different speeds across major advanced economies. The likelihood of faster hikes in US policy rates has already been reflected in slightly tighter short- and long-term financing conditions. Such policy normalisation is desirable, but could expose financial vulnerabilities from accumulated debt and high asset prices. Rising interest rates could create particular challenges for emerging market economies if capital flows and exchange rates were to become more volatile.

Policymakers need to make the right choices to sustain medium-term prosperity and ensure the benefits are fairly shared by workers and households. Fiscal policy, while it remains supportive, should not excessively stimulate demand. Focusing on changes in the tax mix and spending structure holds significant potential to make growth more sustained and more inclusive in the medium term.

Keeping an eye on medium-term goals also means stepping up reform efforts to boost productivity, employment and inclusion. Some countries – Italy, France, Japan, India and Argentina  – have implemented significant reforms. However, our forthcoming Going for Growth report (to be released on 19 March) shows that in both advanced and emerging economies overall, the pace of structural reform is once again slowing, particularly on the tax and skills policies that are so important to achieving inclusive growth. Political support for reform can dwindle in good times. Yet, good times do provide an opportunity to implement ambitious policies to develop workers’ skills, promote competition, and improve the functioning and inclusiveness of labour markets so that living standards rise durably and widely across society.