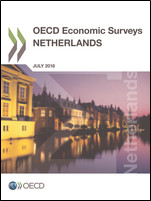 The sector-level impacts will depend on differing UK trade exposures, tariff rates and non-tariff measures (NTMs) applied to different products; varying degrees of global value chain integration of the sectors; and differences in sectors trade diversification opportunities. On trade exposure for example, the agri-food sector has a comparatively high UK exposure. This sector accounts for 23% of the total exports of the Netherlands to the UK while the UK market makes up 12% of total Dutch agri-food exports (OECD 2018).[1]

An illustrative worst-case Brexit scenario – assuming the UK leaves the EU without any trade agreement – is simulated using the OECD METRO model (OECD, 2015).[2] The key advantage of this analysis is that it accounts for changes in both tariff and non-tariff barriers. The scenario assumes that trade relations between the EU and UK default to the World Trade Organisation’s (WTO) Most-Favoured Nation (MFN) rules, that is, the most basic trade relationship. Relative to current arrangements, this corresponds to an increase in tariffs on Dutch trade with the United Kingdom of between 0 and 12  per cent. 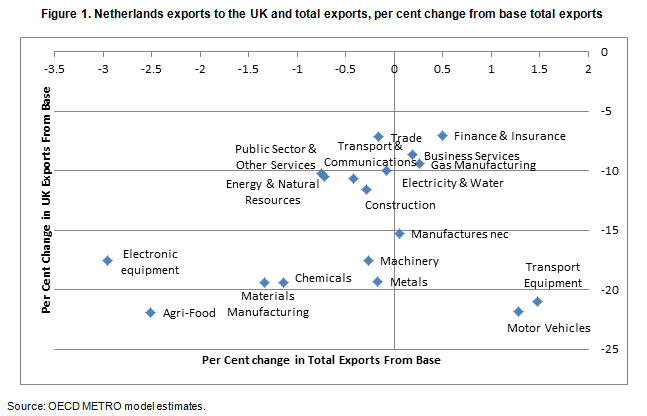 Simulation results show that Dutch exports to the UK would fall by 17%in the medium-term. The Dutch agri-food sector is estimated to experience a 22% fall in its UK exports (Figure 1). This is driven by a substantial 35% decline in exports in the meat products sector. Smaller materials manufacturing sectors such as wood and leather products and textiles would see a 20% fall in their UK exports. The 2% fall in production in agri-food contributes to a 7% decline in the value of agricultural land. Four of the five sectors that record the largest declines in employment following production falls are in the agri-food sectors.

Of all the non-agri-food sectors, electronic equipment would see the largest decline in total exports at 3% and the largest decline in production at 2.4% in the scenario. Access to supply chains for intermediate imports from the UK for Dutch sectors is also curtailed; intermediate imports from the UK would fall by over 40% in the finance and insurance sector in the scenario.

There are a few sectors which have export gains under this scenario. These include motor vehicles, finance and insurance and transport equipment, these sectors show increases in exports to the rest of the EU as well as the United States. The gas sector expands slightly, but this translates into relatively larger gains of gross exports of 6% (to EU) and 10% (to US).

[2] This shock implies a scenario could be the result of a disorderly conclusion to negotiations and can be considered something close to a worst case outcome and does not consider the impact via investment.

Ahead of the referendum on Brexit, the OECD had been anticipating a significant decrease in economic growth if the decision to leave the EU were taken (Kierzenkowski et al., 2016). As the UK economy has started to slow down, OECD simulations remain remarkably valid so far (Figure 1). 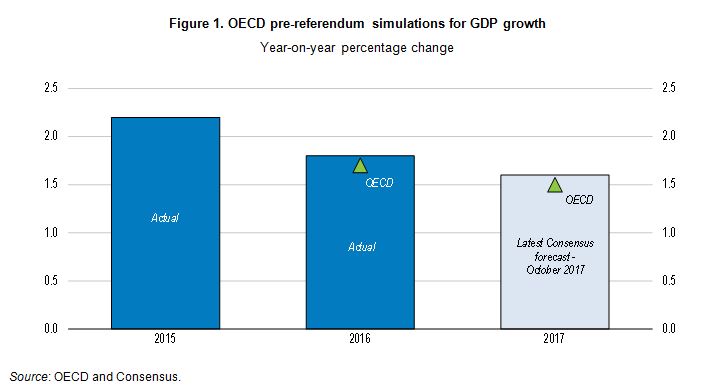 British growth was ahead of G7 economies one year ago, but has now fallen behind as other advanced economies have continued to recover (Figure 2). The recent OECD economic survey on the UK (OECD, 2017) analyses which channels Brexit prospects are currently hurting the economy and what could be done to mitigate this impact. 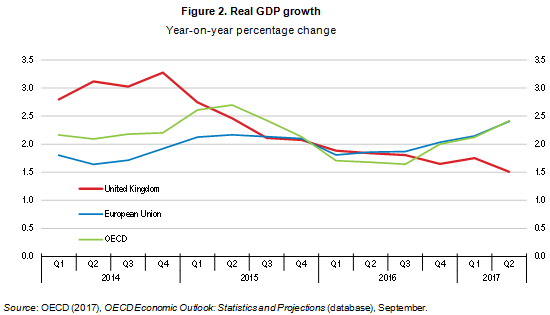 The sterling’s depreciation has been a major drag on growth. It has pushed consumer prices up and hurt household consumption by reducing purchasing power. As real incomes have fallen, households have for a while supported their consumption by reducing their savings. However, the saving ratio increased in the second quarter and consumer credit growth may have peaked. Car registrations are subdued since April.

The sterling’s depreciation has also cut corporate margins of domestic producers, reducing the ability of non-exporting firms to finance investment. In addition, business investment growth has weakened as economic policy uncertainty is high. Weak demand should also negatively weigh on investment of domestically-oriented firms: this is the second-highest risk cited by around half of businesses, with the effects of Brexit being the top risk for nearly 60% of them (Deloitte, 2017).

The depreciation of the pound should support export-oriented firms, but this might not be sufficient to offset the negative factors mentioned above. History indicates that British exports have had a low responsiveness to exchange rate movements and the UK’s export performance has been in fact falling over the last two decades (Figure 3). This could be due to increased participation in global value chains, implying a high import content in exports, reducing scope for exporters to win market share following currency depreciation. Moreover, exporters who rely less on imports tend to increase their margins following a depreciation, preventing them from gaining market shares. 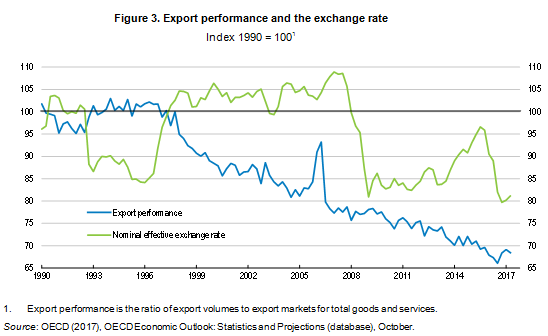 Immigration has enhanced living standards by expanding the labour market and by having a positive impact on labour productivity. Following the EU membership referendum in mid-2016, there has been an important fall in net migration, mainly of EU citizens, explained by increased emigration and reduced immigration (Figure 4). Declines in net migration could tighten the labour market if labour supply falls faster than labour demand. It will significantly reduce growth eventually. 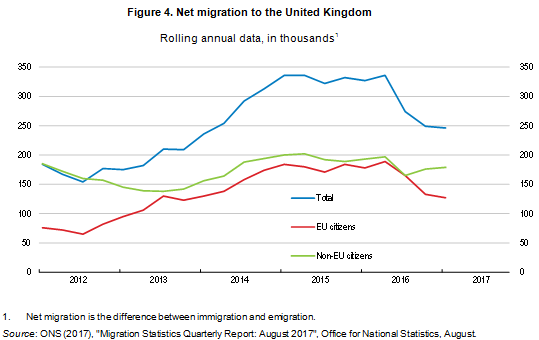 In this context, the recent OECD economic survey recommends that the UK authorities secure the closest possible economic relationship with the European Union in its future trading arrangement. Rapidly concluding negotiations to guarantee the rights of EU citizens is a priority to sustain labour supply and ensure further progress in living standards. The United Kingdom should adopt simple criteria to deal with EU citizens living and/or working in the United Kingdom, which would minimise administrative burdens and avoid that some categories of EU citizens fall into the cracks, such as cross-border workers. The government should also identify in advance productivity-enhancing fiscal initiatives on investment that can be implemented swiftly should growth weaken significantly ahead of Brexit. A detailed evaluation of polices to offset the possible loss of European structural funds to poorer UK regions will also be necessary to avoid exacerbating existing regional economic disparities.

The United Kingdom is a trading nation, with nearly 45% of its exports destined for the EU market and 3 million of its jobs associated with trade with the European Union. Development of the EU single market has benefitted UK exporters, and there is more to come as the European Union undertakes new initiatives to reduce remaining internal barriers to services, benefitting the large UK services sector. Membership has also helped to develop UK trade relationships beyond the EU market. The United Kingdom gains from a large network of EU trade treaties with 53 non-member countries. Another 67 new free trade agreements are being negotiated, including with the United States, India and Japan. Collectively, the EU economies account for 12.5% of global trade, enhancing the bargaining power and influence of the United Kingdom, which accounts for only 2% of world trade. This ensures that new trade deals favourable for the UK economy can be struck.

EU membership has also added to the attractiveness of the United Kingdom as a location for foreign companies and investors. Access to the EU Single Market is a key consideration for many of these investors. The United Kingdom receives far more foreign direct investment than other EU member states, gaining over one-fifth of all new investments in the European Union over the past decade. These investments originate from not only from the United States and Japan, but half of them also from other EU countries. Such investment boosts UK exports and ensures strong integration with value chains in Europe and beyond, for instance in the car sector. Foreign-owned firms support jobs, with around 3.5 million people employed in foreign multinationals in the United Kingdom in 2012. They also support productivity and wages by undertaking a substantial share of research and development and other capital investments, and by introducing cutting edge managerial practices. These in turn diffuse to other UK companies.

The UK economy benefits from one of the lowest regulatory burdens in the major economies, both on businesses and labour markets, suggesting that EU membership is not a significant constraint to growth and job creation. Indeed, the UK employment rate is now at almost 75%, a record high. Further reforms are possible of course, but the remaining obstacles are largely home grown, for instance in the post and road sectors. Greater regulatory convergence in the rest of the EU, championed by the UK, would also generate positive spillovers to the UK economy.

The survey of the British Chamber of Commerce released in May shows that businesses of all sizes continue to support EU membership, even those where the burden of regulations is often the most challenging. The Small Business Act for Europe, launched in 2008, is the EU’s key policy initiative to support SMEs. The UK government has implemented the vast majority of its recommendations to reduce administrative burdens, improve access to finance and strengthen the innovative potential of small businesses. Access to bank finance has been an important constraint for UK SMEs. EU financing programmes for SMEs are channelled indirectly through different government levels and financial intermediaries. The EU also introduced legislation to shorten payment delays, a key challenge for many SMEs.

A major policy challenge facing the UK is to upgrade infrastructure to lift productivity and to make society more inclusive. The European Investment Bank, the EU bank, is helping to support this. Between 2011 and 2015, the Bank provided over 20 billion pounds of support to the UK economy, with 50% on transport, water and telecommunications, 30% on energy, and 10% on education and health. Projects it supports include one of the largest UK infrastructure investments to raise transport capacity in London, Crossrail, the development of the port of Liverpool, the construction of energy-efficient social housing in the UK, the roll-out of more than 7 million smart meters in homes across Great Britain, and the expansion of research and teaching facilities at Oxford University.

EU competition and single market policies benefit UK consumers by raising their protection and their rights. There are EU rules on passenger rights in air travel. Last year, UK residents made over 65 million visits abroad and many benefited from EU initiatives to reduce international mobile roaming charges in Europe. Indeed, these will be eliminated from mid-2017. The EU also plans to end unjustified geo-blocking, enhancing the benefits of online commerce. The creation of the digital single market would yield further gains.

After 43 years of EU membership, the sizeable doubts that have emerged about staying in the EU suggest that the UK may be prone to a mid-life crisis. Yet there is strong evidence that EU membership has magnified the underlying strengths of the UK economy and that it can deliver more benefits in the future. Acting together, as part of the EU, makes the UK stronger than standing alone to confront global challenges, such as climate change and profit shifting.