Some Australians are at a significant risk of poverty, despite the strong economy

Australia is a successful economy with high living standards. It has recorded 27 years of uninterrupted GDP growth. Incomes have grown strongly across the entire range of the income distribution and the incidence of both absolute and relative poverty have declined.  Despite this improvement, quite a significant share of Australians live in relative poverty. About 13% of Australians live in households with incomes below the poverty line – less than half of the median household income. 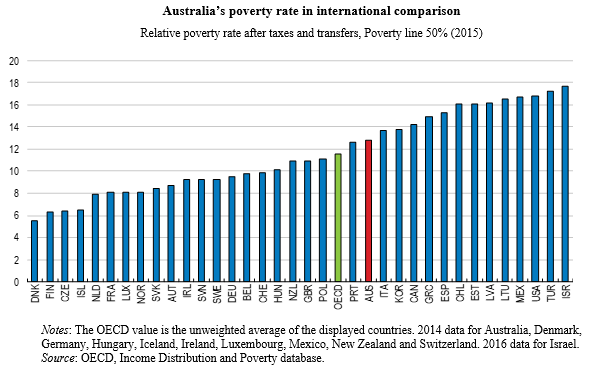 The recent OECD Economic Survey of Australia and accompanying paper (Sila and Dugain, 2018) use OECD and Australian data (the HILDA, household panel survey) to establish which groups are vulnerable to poverty. The analysis uses the concept of relative poverty. Specifically, individuals are classified as poor if they live in households that earn below 50% of the median equivalised household income in a given year.

Certain groups are more at risk of poverty than others. People living alone and lone parents are at higher risk of poverty. Although poverty in old age has declined in the last 15 years, it nevertheless remains high. Old people in Australia have more than 30% chance of living in poverty, a high figure in international comparison. However, Australia stands out less in measures of poverty that correct for housing costs, as many older people in Australia are homeowners.

As regards the working-age population, those out of the labour force and the unemployed are at much higher risk of poverty. In addition, casual workers and part-time workers are at risk, as are people with low education and skills. 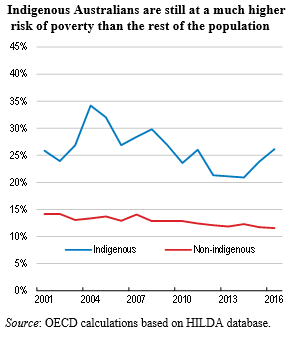 Indigenous Australians are almost twice as likely to be poor than the rest of Australians, and according to the HILDA data, the gap has not been closing over the past 15 years. Indeed, the gap has risen over last two years. Furthermore, statistical analysis shows that indigenous status remains a strong explanatory factor of poverty even after controlling for education, age, industry, skill and remoteness. This means that high poverty among indigenous people reflects a range of unobserved socio-economic issues, including poor health and discrimination.

Sila, U., and Dugain, V. (2018), Characteristics of people at risk of poverty in Australia: Evidence from the HILDA survey, OECD Economics department working paper, forthcoming.