The output cost of the global financial crisis

Assessing the damage from the Global Financial Crisis (GFC) is not straightforward, even with the benefit of hindsight provided by ten years of history, because the counter-factual of what might have happened in its absence is unknowable. However, a simplistic, but commonly adopted approach, of comparing the post-crisis path of GDP with the pre-crisis trend exaggerates the cost and can lead to misleading policy conclusions. Such an approach is akin to treating the GFC as a meteorite from outer space which is completely unrelated or ‘exogenous’ to preceding macroeconomic developments. This is implausible because the pre-crisis trend in GDP involved unsustainable trends in asset prices, most obviously house prices, driven by a long period of rapid excessive credit growth across most of the advanced economies. Similarly ageing has started to progressively reduce the contribution from labour in many economies, so reducing their growth capacity. Hence, the counter-factual represented by the extrapolation of the past trends in GDP was never realistically attainable. A more plausible basis for a counter-factual is an extrapolation of pre-crisis trends of potential output, where potential output is an estimate of a sustainable measure of GDP [1]. The difference between these two approaches is first illustrated by considering the OECD countries as a group and using aggregated measures of potential output that are regularly published in the OECD Economic Outlook. A simple-minded extrapolation of OECD-wide GDP per capita implies an ever-widening loss, which is currently more than 10% of GDP, whereas compared to a pre-crisis extrapolation of potential output per capita implies a smaller loss of around 2-3 percentage points of GDP (Figure 1). 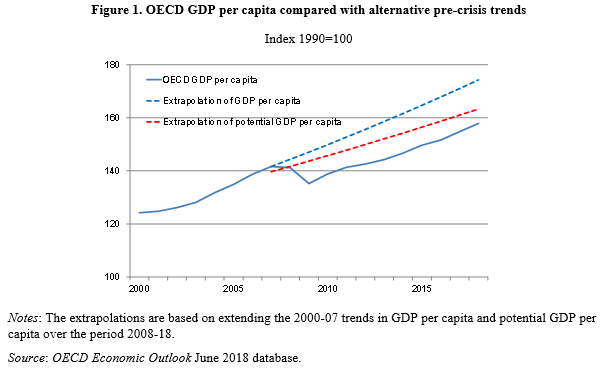 However, the estimated cost of 3% of GDP for the OECD as a whole hides large variations across countries. Among the 19 OECD countries that experienced a banking crisis, following the same approach, the median loss in output is more than double that, at around 6%.

The estimates of potential output also provide an estimate of how the loss was incurred and some clues as to some policy lessons that might be drawn. Perhaps surprisingly, in nearly all OECD countries, aggregate employment rates have recovered and are close to, or have even surpassed, the pre-crisis levels, although some groups (for example young workers) have suffered more permanent losses than these aggregate calculations suggest.  A notable exception is the United States, where the aggregate employment rate is still more than 3% below the pre-crisis level, which may be partly explained by the effects of opioid addiction [2].

Instead, the main lasting macroeconomic damage from the GFC is accounted for by lost productivity. OECD estimates suggest that for a majority of OECD countries experiencing a banking crisis, most of this lost productivity is accounted for by lower growth in capital per worker, rather than lower total factor productivity (tfp) (Figure 2). The loss in capital per worker illustrates how a severe adverse demand shock can be transformed into an adverse supply shock via an accelerator effect on investment that then reduces the capital stock [3]. In addition, increasing evidence, including from firm level studies, suggests that many countries where interest rates were particularly low in the pre-crisis period, especially in Southern Europe, experienced a substantial misallocation of capital. These countries are also among those that experienced a more abrupt post-crisis adjustment in capital stock growth. The fall in capital stock growth was also exacerbated in some countries by cutbacks in public investment after the crisis.

Conversely, much of the loss in tfp can be traced back to weakening trend tfp growth that pre-dates the Global Financial Crisis. This in turn would suggest that policy may be better directed to addressing more long-standing causes, such as the increasing divergence between productivity performance of frontier and laggard firms, which may be symptomatic of rising entry barriers and reduced contestability [4].

[1]  The approach described here represents an update of the calculations presented in:

[2]  A more in-depth analysis of post-crisis trends in employment and labour force participation in the United States, including the effect of the opioid crisis, is provided by:

[3]  A more detailed analysis of the effect of the crisis on productivity in OECD countries, in terms of its effects on capital per worker and tfp, is provided by:

[4]  Evidence on the difference between the productivity performance of firms at the global frontier and laggard firms, as well as possible causes and policy responses, is provided by: