The euro area sovereign debt crisis has exposed important flaws in the design of the Economic and Monetary Union, especially when it comes to dealing with macroeconomic shocks. Compared to federal states, fiscal transfers at the euro area and EU level are virtually non-existent. Since labour mobility remains low, private risk sharing in the euro area mainly takes place through cross-border flows of capital and credit, which may not always be sufficient to deal with large negative shocks.

The lack of effective risk-sharing is particularly damaging in a monetary union, where countries cannot use independent monetary policy or exchange rate depreciation to support growth and employment and national fiscal policies in some countries may be unable, in the short run, to deal with country-specific shocks through national counter-cyclical policies. Moreover, monetary policy may become overburdened even when dealing with common shocks. During the financial crisis, contagion effects and negative feedback loops between sovereigns and banks threatened price stability and forced the ECB to reduce policy interest rates to below zero, coming probably close to an effective constraint for monetary policy. Even though the ECB put in place other unconventional measures, such as asset purchases, to ensure transmission of its policy, these measures are not without costs and limits.

The weak potential growth and inflation outlook for the euro area, as well as the global shifts in saving and investment preferences, also suggest that nominal interest rates may stay close to zero for a prolonged period of time and return close to zero more often in the future (Rachel and Smith, 2017).

In this situation, where the ECB monetary policy may remain constrained for some time and fiscal space limited in some countries, a common fiscal stabilisation instrument would improve the policy toolkit. Our recent paper,  Euro area unemployment insurance at the time of zero nominal interest rates  simulating a general equilibrium model of the euro area with imperfect risk-sharing mechanisms shows that a fiscal capacity, in the form of a common unemployment benefit scheme, can significantly improve macroeconomic stabilisation when the monetary policy constraints become binding.

Building a common fiscal stabilisation instrument for the euro area is an important topic of the 2018 Economic Survey of the Euro Area. The concept of a common fiscal instrument goes back at least to the 1970s Marjolin’s Report and the interest in the topic has been rekindled post-crisis by several concrete proposals, including the IMF’s rainy-day fund (Arnold et al., 2018), the European Commission’s investment protection scheme (European Commission, 2017) and several variants of unemployment insurance and re-insurance schemes (Beblavý and Lenaerts, 2017; Dullien et al., 2018). However, such schemes face significant resistance, due to the fears of permanent transfers towards some countries that would reduce incentives to carry out structural reforms. To overcome these criticisms, the scheme must avoid permanent transfers among countries, a condition made explicit in the Five President’s Report.

Our companion paper, Stabilising the euro area through an unemployment benefits re-insurance scheme, discusses a novel design for a common fiscal stabilisation instrument, in the form of an unemployment benefits re-insurance scheme. As other recently proposed mechanisms (European Commission, 2017), the scheme is activated according only when unemployment increase and is above its long-term average, and involves a cap in payments, ensuring that pay-outs to individual countries are limited. These features, together with a mechanism charging higher contributions to countries that draw more frequently on the fund (experience rating), effectively prevent permanent transfers in the medium term.

Using counterfactual simulations of the proposed mechanism for individual euro area countries on annual data from 2000 to 2016, we show that the scheme would have delivered considerable stabilisation gains, both at the individual country level and euro area level (Figure 1). Macroeconomic stabilisation would be timely in most cases and achieved at the cost of limited debt issuance (less than 2% of the euro area GDP) and average annual contributions not exceeding 0.17% of GDP (Figure 2). It would have also avoided permanent transfers among countries, as none of them would have been a major net contributor or receiver with respect to the scheme, and all countries would have benefited from the scheme at one point in time. 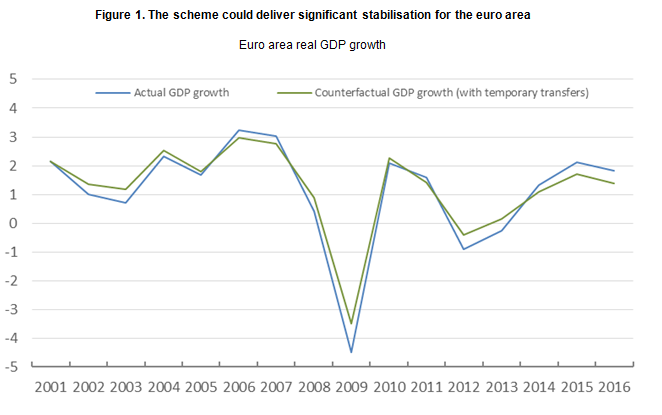 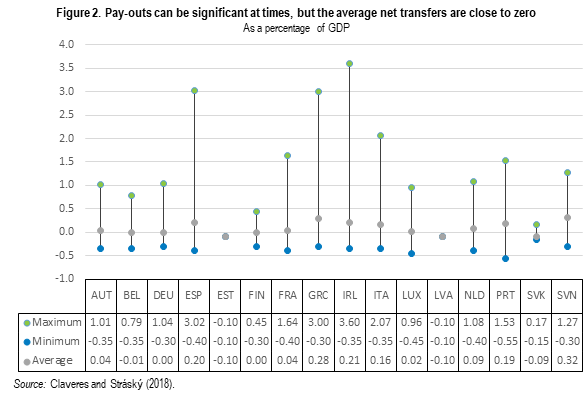