Inequality and relative poverty in Israel remain high, particularly among Arab-Israelis and Haredim (Ultra-Orthodox). Israel’s social policy follows a “welfare-to-work” approach to tackle poverty in order to avoid measures that may harm work incentives among the Haredi, who value the time dedicated to religious studies, and the Arabs, who have cultural barriers to female employment. The government’s strategy of encouraging employment among previously non-working families has met with substantial success. The Israeli labour market has improved markedly, and more and more Haredim and Israeli-Arabs have been able to find jobs. Moreover, the average real income of poor households has risen by almost 3% annually in the last six years, while the average annual real income of wealthier households has increased by only 2.2%.

However, inequalities remain internationally high, and the current strategy without complementary steps has its limits. Many disadvantaged workers have been able to find jobs, but their families remain poor, since in most cases these jobs are low-paid. Indeed, the share of the working poor has risen in recent years and is comparatively high (Figure 1). 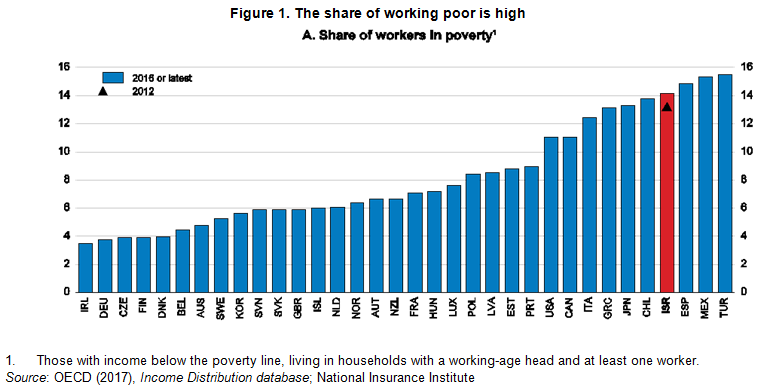 This is particularly true for the Haredim and Israeli-Arabs, who earn on average only 70% and almost 90% of the median hourly wage, respectively, mostly due to the differences in skills and typically have families with only one breadwinner. Given the current tax-transfer system and large number of children in these households, especially in the Haredi community, even two full-time working spouses would not be enough to escape from poverty (Figure 2). 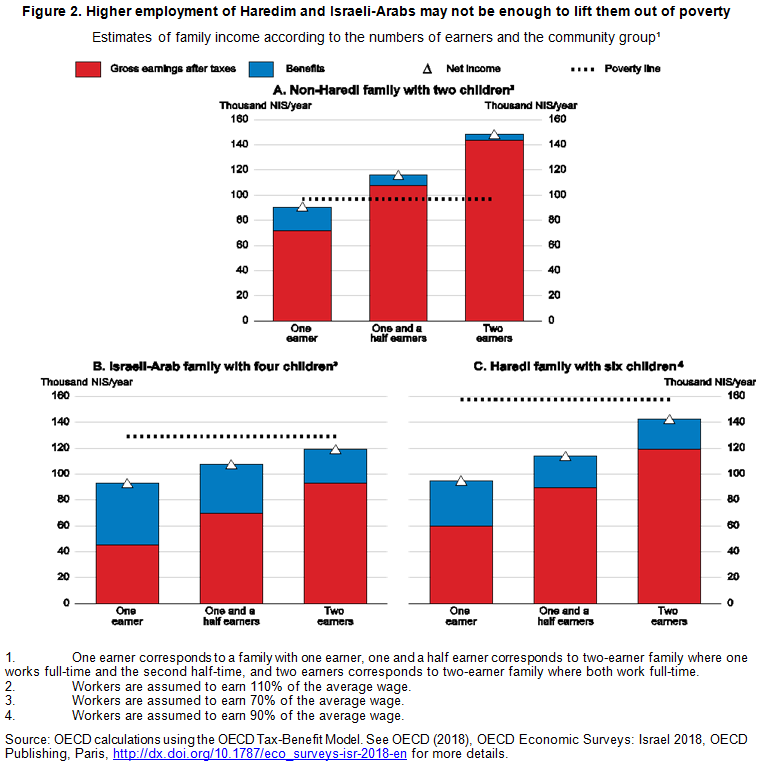 Therefore the current government strategy should be accompanied by additional measures. Extensive poverty in Israeli society is to a significant extent due to the wide dispersion of skills. The government should improve the education outcomes of the disadvantaged groups to boost their future productivity and wages. As the 2018 OECD Survey on Israel argues, the education system needs to become more inclusive by giving all children opportunities for good-quality education to improve their skills. The government should also focus on programmes for adults who have already left initial education without proper skills. In addition, it should further expand in-work benefits to boost take-home pay of the average eligible worker.