Why would a universal credit be better than a basic income for Finland?

“If you don’t know where you are going, you might wind up someplace else.”

Many Finns seem to agree that the social welfare system should be reformed, but there is no agreement as to which form such change should take. Recognising that the decades-long process of piecemeal welfare reform responding to the pressing issues of the day is behind many of the current problems, the OECD Economic Survey of Finland 2018 argues for developing a common vision for the future of social welfare in Finland, so that upcoming reforms can consistently pull towards the same goal.

In Finland, as elsewhere, income taxation and the withdrawal of benefits reduce the pay-off for individuals who go from benefits to work. Multiple benefits interact in complex ways, trapping individuals in unemployment, underemployment or inactivity. Complex benefit rules combine with administrative practices to create “bureaucratic traps” when individuals taking up temporary, part-time or unstable employment face a real or perceived risk of losing eligibility or receiving benefits with a delay as their claims are re-evaluated. This can further reduce the attractiveness of work for risk-adverse, often cash-strapped, recipients. A third weakness of existing welfare systems is that they are built around traditional employer-employee relationships, and are thus ill-adapted to the future of work, which is likely to involve more changes in careers, part-time work, self-employment and platform work.

Two different benefit reform scenarios are developed in the Survey to inform a common vision for the future of social welfare in Finland. The first is a uniform benefit for all, a universal basic income. The second is a universal tapering rule inspired by the universal credit welfare reform in the United Kingdom. This scenario radically simplifies the existing benefit system and makes it more transparent by merging various benefits and withdrawing them at a single and moderate rate as income from work increases.

Comparing these scenarios with the current system illustrates the inevitable trade-offs between work incentives, inclusiveness and fiscal cost, the policy trilemma at the heart of social insurance and redistribution policy. Neither a basic income nor a universal credit can defy the laws of gravity. But some specific incentive issues can be resolved without much sacrifice by improving benefit design, and the general direction of reform has great consequences for outcomes.

A universal credit would consistently improve work incentives and reduce complexity, with limited changes to the income distribution and limited fiscal cost. A basic income would also remove some incentive traps, but would entail a major redistribution of income, widening inequality and increasing poverty. This happens because the design of a basic income with one uniform benefit for all is too simple to achieve the redistribution of the current system or a universal credit, where benefits are targeted to those who need them more. Assuming that the distribution of income in a longstanding democracy reflects Finns’ social preferences, it seems clear that merging and simplifying existing benefits is a better solution for Finland than a universal basic income. This conclusion is also likely to be relevant for other developed countries with solid and targeted social safety nets. 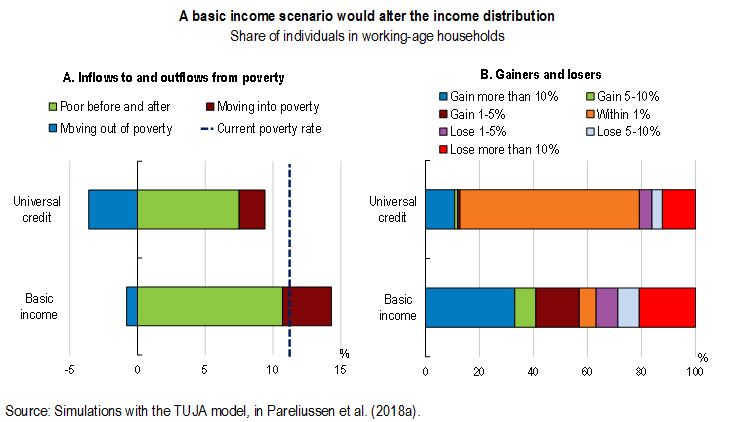 Simulating reforms is one thing but implementation can be a quite different story: experience has shown that major welfare reforms can come with significant costs. Implementation should hence be stepwise and build on the existing institutional context. Important technical building blocks, such as harmonised tax treatment and income definitions for different benefits as well as the new income registry should be fully operational and tested before reforming the overall architecture of the system.

Moreover, many current weaknesses, such as the cliff-edge loss of unemployment benefits once an individual works a certain amount of hours per week, the extended unemployment insurance for older workers and barriers to work for mothers created by childcare fees and the homecare allowance, can be overcome with relatively limited changes to the current system. Such measures should be taken without delay, but every step forward should be a stride towards an agreed vision for the future of Finnish social welfare – a vision where benefits continue to support Finnish citizens throughout their lives, protecting them from shocks and misfortune, but in a coherent, transparent and flexible way, fit for the future of work.