Switzerland’s productivity puzzle: Being a leader and an underperformer

Switzerland is among the leaders in many global rankings including on R&D, innovation, infrastructure, universities and competitiveness. It is well integrated in global value chains, specialised in some high-value-added activities and home of many large multinationals. These factors should contribute to high, and rising, labour productivity. However, it has been falling behind other OECD countries, including the United States (Figure 1). Switzerland’s labour productivity still ranks amongst the top-10 OECD countries, but its growth performance has been poor in recent decades. During the 2000s its GDP per capita growth was driven mainly by an increasing employment rate, which reached record highs. That no longer has much scope to continue, which calls for focusing policy efforts on bolstering productivity to sustain Swiss living standards. 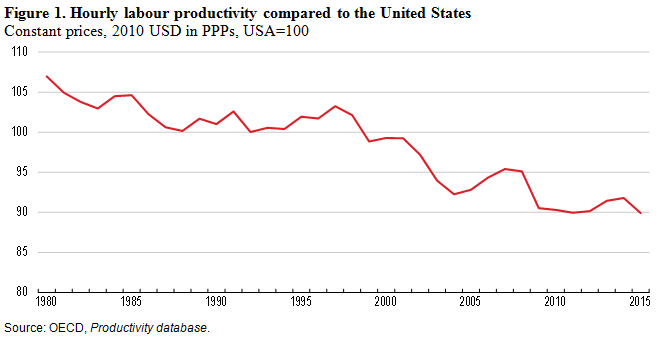 The recently published OECD Economic Survey of Switzerland (OECD, 2017) studies Swiss labour productivity from a firm-level perspective using the KOF Swiss Innovation Survey database. The results point to a growing gap between Swiss frontier firms and the rest (Figure 2), similar to the pattern observed in other OECD countries (Andrews et al., 2016). This is particularly the case in the services sector.

Labour productivity growth is higher in firms that have introduced innovations and those with a larger share of high-skilled employees. However, fewer and fewer firms conduct R&D, while they spend more and more francs on it. This accentuates the concentration of R&D in a limited number of firms (around two-third of patents over 2006-11 originated from just 20 firms) and in pharmaceuticals (which accounted for nearly 30% of Switzerland’s business R&D in 2013). In addition, small firms report facing constraints in finding workers with needed skills.

This suggests the existence of a two-speed economy. A small segment of firms does extremely well. Others are suffering, driving the weak overall labour productivity growth outcome. 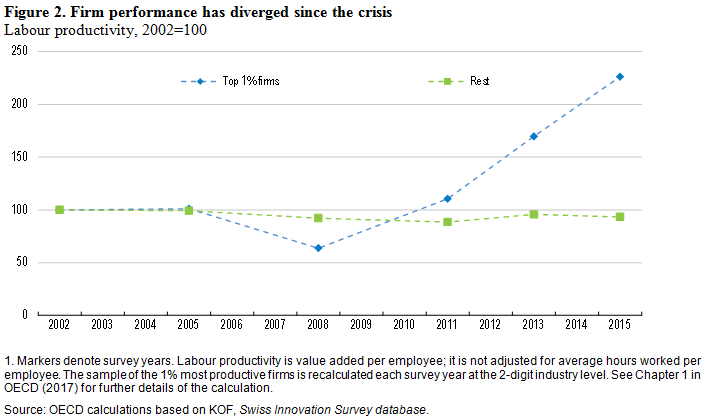 Facilitating firm entry and exit are key ingredients for business dynamism and boosting productivity growth. Furthermore, entrepreneurship is not very high for the 18-24 year-old population. Several recommendations would boost the creation of innovative start-ups:

Risk-taking would also be facilitated – pushing up start-up rates – if Switzerland implemented a personal bankruptcy regime, allowing honest, hard-working entrepreneurs to have a second chance.