The global economy is now growing in sync at his fastest pace in years, but financial vulnerabilities create challenges for medium-term growth. Private indebtedness, including of households, remains a source of concern, as set out in the special chapter of our latest Economic Outlook on “Resilience in a time of high debt”. Household debt ratios in many advanced economies as well as some emerging markets have trended up from the late 1990s, mostly peaking up around the onset of the financial crisis and stabilising at historically high levels thereafter. Household debt dynamics over the past decade nevertheless exhibit significant cross-country variation. Indebtedness has continued to rise from high levels in the Scandinavian countries, Australia and Canada, whereas some deleveraging has occurred in a few countries (Figure 1). In EMEs, household debt remains below the levels experienced by advanced economies, but it has been buoyant over the last years particularly in some Asian economies. 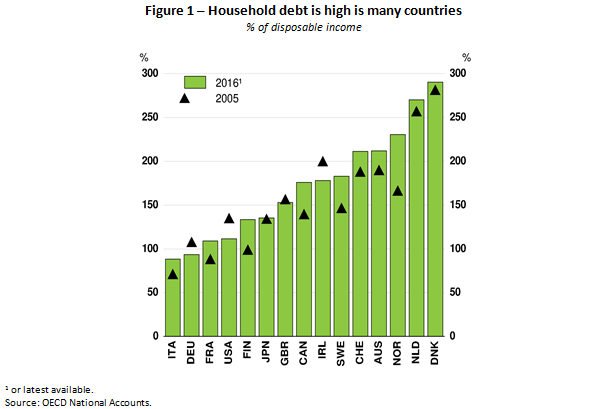 High and rising indebtedness creates vulnerabilities and exposes households to shocks via a number of channels. First, household debt ratios are closely linked to house prices and the credit cycle in mortgages can have strong effects on the price of dwellings. Among OECD countries, those that experienced the strongest increase in household debt since the crisis have also seen the steepest rise in house prices (André, 2016). Housing booms often lead to busts which cause severe economic downturns, as during recent global financial crisis. OECD research suggests that global risk indicators such as the global credit-to-GDP or global house prices appear to be predictive signals of future recessions (Figure 2; Hermansen and Röhn, 2017). Moreover, high household debt, alongside slow growth of disposable incomes, also implies that debt service costs may weigh on medium-term consumption growth, particularly for lower-income households. 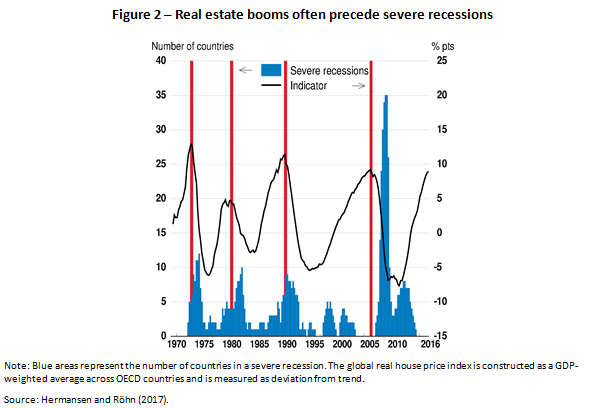 Reducing financial vulnerabilities and enhancing the resilience of households and financial systems in times of high private debt requires an integrated approach. An appropriate use of macro-prudential measures such as loan-to-value (LTV) or debt-to-income (DTI) is needed to prevent unsustainable credit fuelling housing dynamics. Easing strict regulations or controls that affect housing supply, including land-use regulations at the local level, could also help reduce vulnerabilities arising from high household debt.