Brighter futures or dashed expectations? The global recovery needs to deliver gains for all

Global growth has gained momentum in 2017 and the economic recovery is moving forward, as shown in our latest Economic Outlook. Labour productivity is improving from its decade-long sluggishness. Yet, expected productivity gains still lag far behind pre-crisis norms, and will not be sufficient to set the stage for long-term improvements in living standards (Figure 1, Panel A). Multiple structural obstacles –  including a lack of competition and business dynamism and high shares of “zombie” capital – slow down the investment, innovation, and technology diffusion that are crucial for productivity growth.

Slow labour productivity growth has been a driver of slow increases in real wages, alongside remaining hidden labour market slack, a rise in non-standard forms of employment and weakened labour market institutions (Figure 1, Panel B). This means that in most advanced economies, incomes are unlikely to rise in line with the pace that households experienced in pre-crisis decades, and that they have come to expect for the future.

Without stronger and more widely shared productivity, wage and income growth, promises to younger generations will not be kept. In the past, each generation used to enjoy rising incomes over their working lives and higher living standards than their elders. These trends have slowed or even reversed in the last decade for generations currently in their prime working age (Figure 2). Real incomes have decreased for people born in the 1970s, feeding into public dissatisfaction. Ensuring that this lost decade does not become a “lost generation” is a call for deeper policy changes. 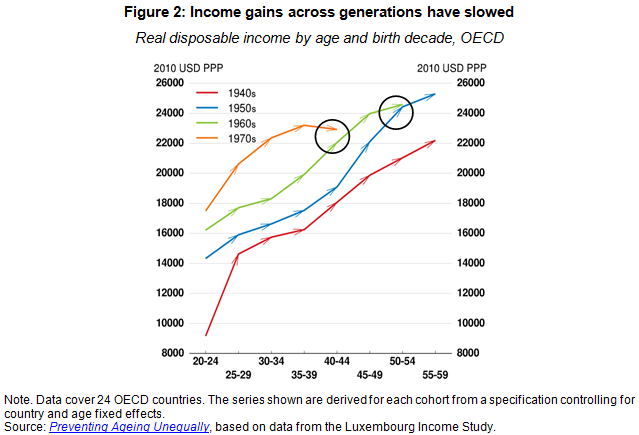 To raise prospects for better living standards for their populations, policymakers need to take action to catalyse more robust investment and productivity gains towards higher wages and incomes for all. Reform packages should focus on promoting competition and trade, improving active labour market policies and social protection, and developing human capital to seize the opportunities of the future. The short-term momentum provides a window for bold action that could and should promote stronger and more inclusive growth.