The Policy Challenge: Catalyse the private sector for stronger and more inclusive growth

by By Catherine L. Mann,  OECD Chief Economist and Head of the Economics Department,

Global economic growth is strengthening, with incoming data surprising on the upside. We project global GDP growth to be between 3 ½ and 3 ¾ per cent through the projection horizon, closer to long-run averages. Will this synchronised momentum finally propel the global economy to gather enough speed to raise productivity, real wages, and living standards for all? 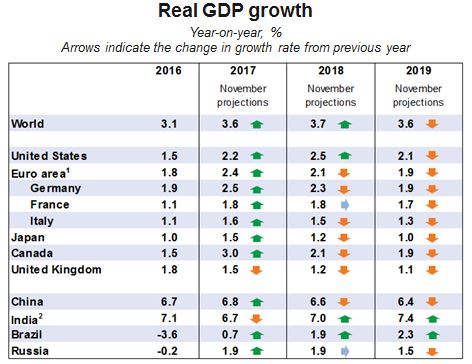 More robust and higher quality private sector investment, including in intangibles and skills, is key for long-term productivity and real wage growth. There are positive signs: surveys indicate that businesses intend to invest, particularly in technology-embodied capital; and the now synchronous global upturn signals demand for investment, particularly given the erosion of the capital stock. But, projected investment rates remain too low to sustain the acceleration of activity. As a result, our projection for global GDP for 2019 shows a tempering of growth rather than continued strengthening.

A myriad of obstacles (different across countries) stand in the way of the more robust investment crucial for productivity growth to meet the public’s expectations for higher living standards, and to fulfil the longer-term commitments of governments to provide solid career paths for the young and adequate pensions for the old. For example, services restrictions create hurdles to invest, particularly for smaller firms; judicial delays hinder the clean-up of balance sheets and capture resources in poorly performing firms; housing policies can make it difficult to hire workers with the right skills, undermining investment by both workers and firms.

Some people think that the per capita income growth enjoyed in previous decades is out of reach, and that those expectations are unrealistic or even inappropriate, given demographic and environmental considerations.   On the former, OECD research shows that changes in pension policies to promote longer working careers and increased participation of women can offset much of the demographic drag on potential output. On the latter, the OECD report “Investing in Climate, Investing in Growth” shows a path to better well-being consistent with climate change commitments. More robust productivity growth is needed to raise wage prospects in advanced economies and higher investment—in social, public, human, and physical capital (with different combinations for different countries)—is needed for emerging economies to sustain catch-up in living standards.

Financial markets provide additional signals that real investment has yet to fully fire, and that incentives are misaligned.  When firms invest in financial assets rather than in real capital, asset prices rise relative to long-term growth prospects. Evidence continues to build that financial asset prices are inconsistent with expectations for future growth and the policy stance, exacerbating the risks of financial corrections and growth downdrafts. Vulnerabilities appear through a number of channels: volatility measures are low even as the probability of sharp corrections is high, equity prices are high relative to expected growth rates and discount rates, credit spreads are narrow relative to risks, bond yields are low relative to probable outcomes of fiscal and monetary policies, and historically-high duration exposes bond holders to interest rate normalisation. Current global growth rates, and fiscal and monetary space are too limited to weather a financial downdraft. This puts an even greater premium on structural policy efforts.

Policymakers need to trigger deeper changes to their policies to catalyse investment, productivity, and real wage growth and make growth more inclusive. The OECD’s Going for Growth exercise documents that many countries have focussed and made progress on policies that enhance labour market fluidity and participation by redesigning benefits and “making work pay”, and by improving childcare so as to enhance labour force inclusion of women. These reforms have paid off with higher employment rates, particularly among groups that typically have been more weakly attached to the labour market. However, for these reforms to be reflected in high productivity and real wage growth, opportunities for right-skilling need to improve and productivity gains need to diffuse from the frontier to all firms. Further, competition in markets enhances competition for workers, making for better skill matching and higher real wages. Policymakers’ efforts on product market reforms have been less ambitious, in particular on anti-trust/competition policy action and on trade and investment policies; indeed, threats to roll back openness permeate the policy landscape.  Although progress has been made on financial market repair, zombie firms still capture too much labour and capital, taking a toll on business dynamism, productivity and real wage growth.

The financial crisis prompted structural reform and new regulation of parts of the financial system, but private sector debt remains high. The past decade has seen a growing reliance by firms on bond financing at attractive rates, with deteriorating credit quality and use of international issuance, as set out in Chapter 2 of this Economic Outlook on “Resilience in a Time of High Debt”. While credit is needed to support economic activity and innovation, it can increase risks, lower growth and raise inequality. An integrated policy approach is needed to enhance the financial resilience of economies to shocks and to minimise the risks of sub-par growth in the medium term. Financial regulation should not focus only on risk, but also on growth.

Policy fatigue and sluggish growth in the past decade have curbed reform ambitions. And some might suggest that the global upturn means that no more policy effort is needed. In fact, the rapid pace of technological change ‒ digitalisation, robotics, artificial intelligence, cloud computing ‒ demands deeper and more extensive reforms, not complacency.  Attention to the local challenges of global and technological changes has to ensure that opportunities will be shared.  Those countries that step up policy efforts will create a better environment for their firms and public. With the global upturn putting wind under the wings of policy, now is the time to redouble the effort. 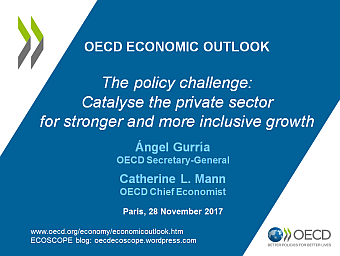