Growth has become more inclusive in recent years. Living standards have improved and poverty has declined (Figure 1). However, the gap between rich and poor remains among the highest in Latin America. The peace agreement will boost economic growth, but to share it fairly Colombia must also achieve better educational outcomes and bring more people into the more productive formal economy. 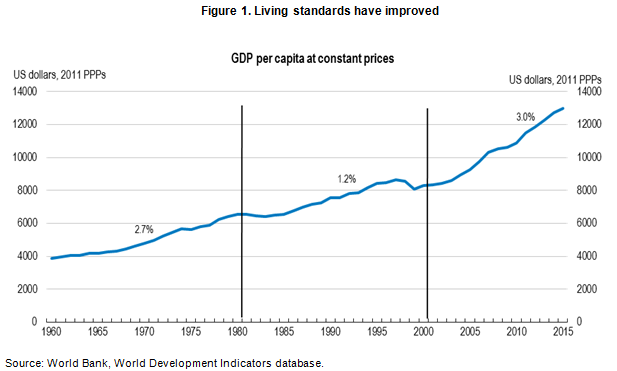 One of the key challenges facing Colombia is the creation of better quality jobs. Although the economy has grown strongly for some time, income and regional inequalities remain important (Figure 2). Informality is high in the labour market and keeps more than half of the workers in marginal, insecure, low paying jobs without access to social benefits. The earnings gap between formal and informal workers is significant. The Colombian authorities have promoted the formalisation of labour over the past decade. In particular, the tax reform of 2012, which reduced non-wage labour costs by eliminating some labour taxes led to a significant increase in formal job creation. To reduce informality more, focus should be placed on further reducing the non-wage labour burden on wages; and simplifying the complex procedures for the registration of companies and the affiliation of workers to social security. 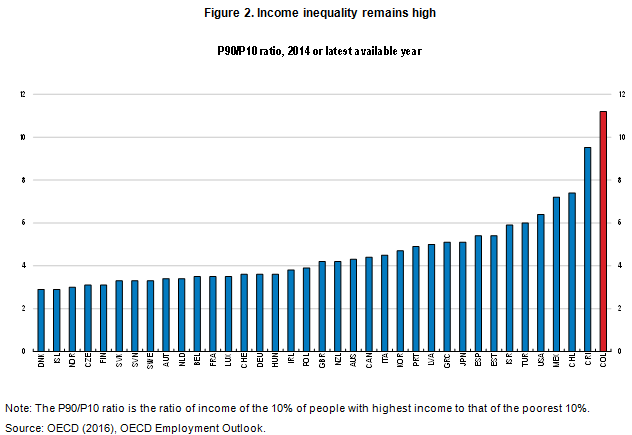 Despite significant progress in reducing gender inequalities in education and providing more opportunities for women to develop their careers, gender employment and wage gaps still remain; in particular for low-income, low-educated and rural women. Greater and more affordable child, elderly and disability care could open the job market to more women. Colombia should also increase investment in active labour-market policies such as training to reduce the gender gap in labour market participation.

A key ingredient to enhance inclusive growth is to raise the quality of education at every level, starting in pre-primary. The performance of the education system has improved in recent years as shown by the new PISA results (an internationally standardised test for 15 year olds). Colombia has made impressive gains in expanding access to education but the quality is still highly unequal and too many students leave education without the basic skills they need to succeed in life and work. Raising the quality of teaching will be vital to improve student learning.

The social system could also redistribute more. Public social spending has increased remarkably since the 1990s due to commitments in the Constitution and greater decentralisation of public expenditure. Nonetheless, social spending remain low relative to GDP and compared to the OECD average, are not always well targeted and have a very limited redistributive impact. The pension system leaves many elderly in poverty. The high level of informality and stringent eligibility requirements generate a low coverage especially for women and lower-skill workers. The government provides old-age income support for the poor through Colombia Mayor but coverage and benefits are too low. A reform of the pension system is needed to extend coverage and increase the elderly well-being.

Health coverage is almost universal. Out-of-pocket payments have substantially declined and almost all citizens have access to an equal basket of services whether they are in formal or informal employment. However, access to quality services remains difficult for the poor and in rural areas. Given the remoteness of many areas in Colombia, poor availability of health centres and health professionals, deficient transportation and high transportation costs make it challenging to ensure an adequate standard of care quality in all regions. Consequently, health outcomes differ across regions. A different delivery and financing model is needed in rural and remote areas to achieve levels of access and quality that are comparable to advanced urban settings. This will require forging a sustained service network between rural and urban health care providers.