A combination of market-based policies and a redistributive welfare state have helped Belgium achieved among the highest living standards in the OECD. While the economy remains highly productive, productivity growth has slowed  over the past two decades (Figure 1 & 2). Reinvigorating productivity growth will be necessary to sustainably increase economic prosperity over the coming years. 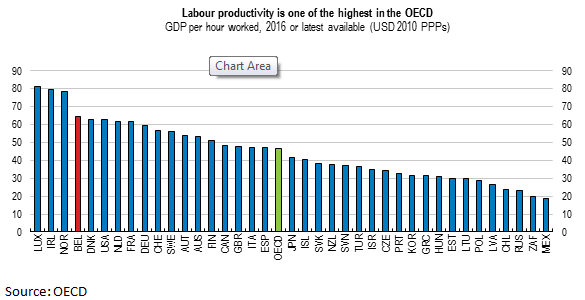 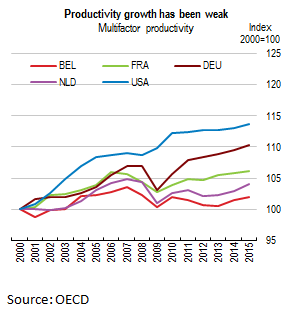 With a particular focus on the business environment and skills and labour market policies the 2017 OECD Economic Survey of Belgium identifies several measures that could help improve long-term productivity growth.

The general framework conditions in Belgium are by and large favourable for private sector activity. Nevertheless business dynamism, as measured by entry and exit rates, is weak (Figure 3). This is important because international evidence suggests that young firms contribute more than proportionately to innovation, productivity growth and job creation. The low rates of entry and exit in the business sector may reflect a dominating presence of large, established firms. Relatively high administrative burdens on start-ups, including the low threshold from which firms are required to register for VAT, and a high minimum capital requirement for establishing a firm also act as barriers to entry. Many young, innovative firms also face financing constraints, particularly in the scale-up phase, suggesting that increased access to venture capital would enhance firm dynamism. 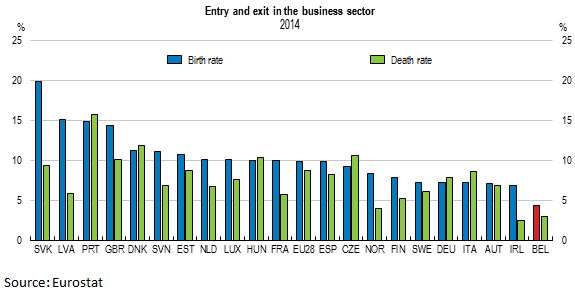 At around 2.5% of GDP Belgium’s spending on research and development (R&D) is above both the EU and OECD averages. However, it falls short of the Lisbon target of 3% of GDP. Moreover, the share of business enterprise R&D in total R&D spend

ing has declined over the past two decades. Public support programmes for R&D and innovation could be streamlined to improve their effectiveness, while the effectiveness of existing tax incentives for private companies should be critically assessed. Public sector entities at the different levels of government could also step up their innovation co-operation, and could do more to foster collaboration between universities and research centres, and private companies. 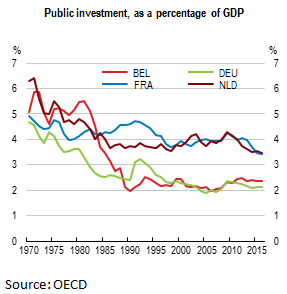 Productivity growth has also been held back by low public investment, particularly in transport infrastructure. Public investment declined from close to 6% of GDP in the early 1970s to just above 2% of GDP since the 1990s (Figure 4). Antwerp and Brussels are among Europe’s five most congested urban centres. Given limited fiscal space, public investment could be financed through a combination user fees, well-designed public-private partnerships, reductions in inefficient public spending, and higher non-distortionary taxes.