by the Italian Ministry of Economy and Finance, Pier Carlo Padoan, Italy’s Minister of finance, was OECD Deputy Secretary-General and Chief Economist from 2009-2014). 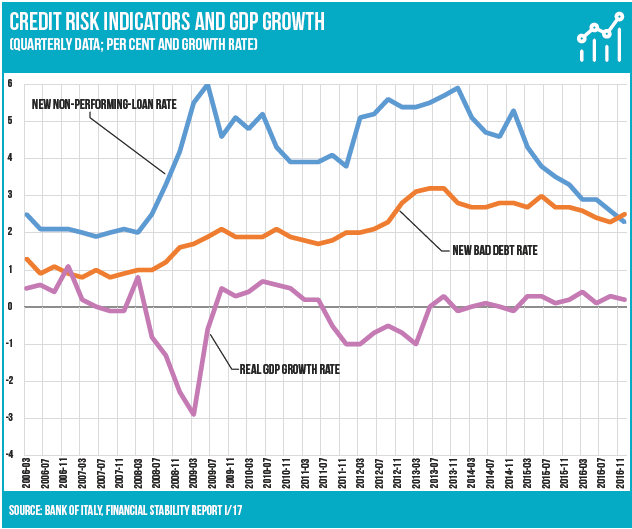 To begin with this latter topic, three interventions involved seven banks that were experiencing major strains. The first intervention required the resolution of four small and mediumsized regional banks that led to the formation of “bridge banks” in charge of continuing operations, thus rescuing 12 billion euros in savings for about 1 million customers.

The resolution procedures ended in April 2017 with the sale of three “bridge banks” to a larger bank (UBI). BPER acquired the fourth in June 2017. Buyers were selected through a fair, open and transparent procedure. This resolution did not imply any State aid, thus requiring a major effort by the banking sector. The private sector provided 4.7 billion euros to avoid bankruptcy and its social and entrepreneurial consequences, preserving the issue of loans to over 200,000 small and medium-sized businesses, small retailers and craftsmen.

More recently, the Government intervention was addressed to the liquidation of Banca Popolare di Vicenza and Veneto Banca. After the ECB recognized the two banks as “failing or likely to fail”, the Single Resolution Board stated – under the EU Banking Recovery and Resolution Directive – that the crisis had to be dealt with according to national insolvency rules, since a resolution was not applicable. Consequently, the Italian Government started a liquidation procedure assisted by public resources combined with the sale of some assets and liabilities of the two banks to Intesa Sanpaolo. The Government, after having shared the burden of the intervention with shareholders and junior bondholders, committed around 4.8 billion euros in cash and around 12 billion euros in guarantees for that purpose. As in previous cases, the procedure preserved the flow of credit to clients of the insolvent banks (families, businesses, craftsmen), and limited the impact on the social and business environments of one of the best performing regions in the Country.

By facing each case with a suitable solution, according to the specific nature and magnitude, both European and Italian rules could be implemented offering the best possible solutions. Improvements in the banking industry are a different matter altogether, they require a deeper and more thorough approach, to be pursued through structural reforms designed to reduce inefficiencies and address the issue of non-performing loans (NPLs).

The reform of large cooperative banks (the so-called “Popolari”), introduced as early as January 2015, aims at consolidating and bolstering the Italian banking system. Banks included in the cluster were forced to transform into joint stock companies, and as a result, two of them merged, creating the third largest group in Italy. The reform of smaller cooperative banks promotes consolidation in the industry, as well as the adoption of more efficient business models reducing the exposure to market risks. Finally, the self-reform of banking foundations is meant to put greater emphasis on the community-based initiatives of the foundations in place of interfering with the management of participated banks.

Alongside such structural reforms of the banking sector, the Government has adopted measures to encourage the creation of a market for non-performing loans, which helps to reduce the burden of those assets and restore an adequate flow of lending to the real economy.

These provisions include the institution of a guarantee on the Securitization of Bad Loans (GACS), which is a State guarantee on ABS’ senior tranches granted upon request by the banks. Changes to Italian insolvency rules and to foreclosures procedures also may help in creating a market for NPLs, as they improve the efficiency of insolvency proceedings and streamline the enforcements of creditors’ rights. The legislation now includes a series of measures to reduce lead-time for foreclosures such as: competition in pre-bankruptcy agreements with creditors; acceleration of sale transactions to ensure higher NPLs value; new rules for debt restructuring; easier access to credit for troubled companies; amendment of the regulations governing the deductibility of credit losses; and agreements secured by real estate assets, where parties may agree that transfer of the assets will become effective upon default by the borrower.

Even after facing a long recession, the Italian banking sector has proven to be sound and resilient. The stock of NPLs is shrinking at an increasing pace, while the origination rate of new exposure is approaching pre-crisis level. Those comprehensive interventions on specific banks and on the industry as a whole reduced and in some cases excluded major sources of risk. Overall, after years of adjustments, the Italian banking industry is returning to positive, effective and promising levels of performance.