The middle-income plateau: trap or springboard?

The overall slowdown and mixed growth performance of emerging market economies in the past 15 years (see chart) has revived angst about a so-called “middle-income trap”. While countries with lower incomes often do grow faster so as to close some of the gap with high income countries, they have done so at very different and uneven speeds.  Clearly, a durable and consistent strengthening of growth in these economies is key for global growth to return to higher long-term averages, as underlined in the latest OECD Interim Economic Outlook.

But how compelling is the notion of such a “middle-income” trap? A guided tour of the recent literature (Gönenç, forthcoming) shows that provided countries adopt the right policies, they are not doomed to get stranded mid-way but can and do converge with the most advanced economies. 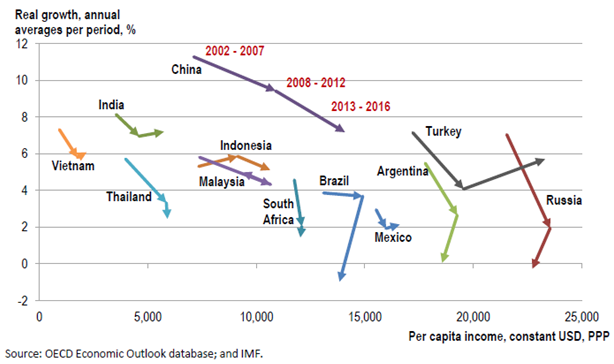 Indeed, a forensic investigation of the statistical evidence reveals that middle-income countries, defined according to GDP per capita or distance to the US benchmark, manage “escape velocity” to higher income levels more often than either poorer or richer countries do (Han and Wei, 2017). However, growth slowdowns are admittedly also more frequent in the middle-income group, which therefore displays greater dispersion in performance.

One reason is that the impact of economic policies on GDP growth is greater at middle than at lower and higher income levels, as shown in recent econometric analysis undertaken at the OECD (Égert, forthcoming).

Earlier long-term growth regressions have highlighted four areas that influence the speed of convergence, and where most middle-income countries have ample room for progress:

Even so, regressions leave much of the cross-country variation in growth unexplained. Growth remains a highly idiosyncratic process and may pick up when conditions – as captured by the indicators used in such regressions – look unfavourable, and vice versa (Levy and Rodrik, 2017). One reason may be related to how entrepreneurship flourishes, or is hindered, an area where experience varies considerably across countries and time for myriad reasons.

Many of the relevant factors were recognised already in the early 1960s by Rostow (1960) and others when they advised international organisations and the Kennedy administration on how to promote economic take-off in the developing world, calling for a shift in focus from individual infrastructure projects to more systemic changes in economic incentives and institutions. The latest econometric evidence supports their underlying insight that pushing ahead with reforms on a broad front should enable these economies to catch up over time with the more advanced ones.

Han, X. and S. Wei (2017), “Re-examining the Middle Income trap hypothesis (MITH): What to reject and what to revive?”, Journal of International Money and Finance, Vol 73.