Estonian growth is picking up again strongly in 2017 and the level of activity has finally surpassed its pre-crisis level, almost 10 years after the outset of the financial crisis (Figure 1, panel A). However, poverty remains among the highest in the OECD (Figure 1, Panel B).

To make growth more inclusive, the 2017 OECD economic survey argues that Estonia should make its tax and benefits policies more redistributive, but also use more actively its large fiscal space by allowing a small fiscal deficit in the longer term (OECD, 2017). 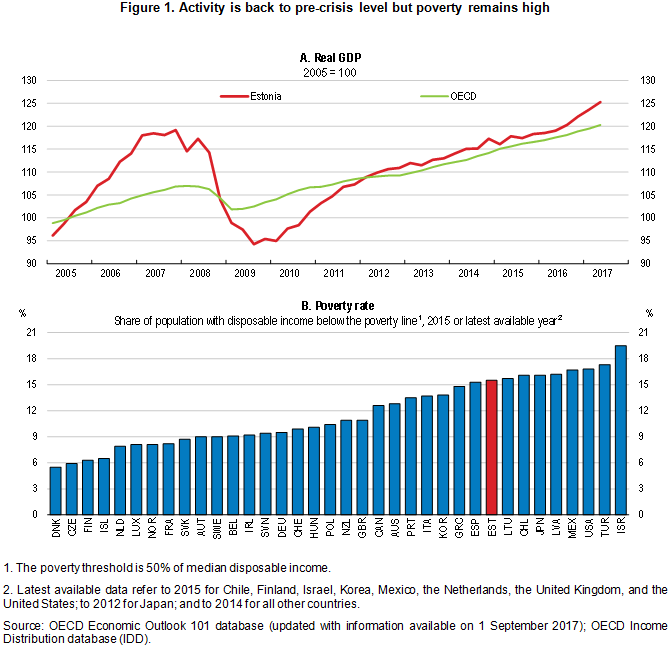 Market income inequality is high (Figure 2, Panels A), but the redistributive effects of the Estonian tax and benefit system is low (Figure 2, Panel B). It leaves a considerable proportion of the population at risk of poverty, notably the unemployed, disabled and low-educated. The old-aged are also more at risk of poverty, in particular because of the relatively low level of pensions. 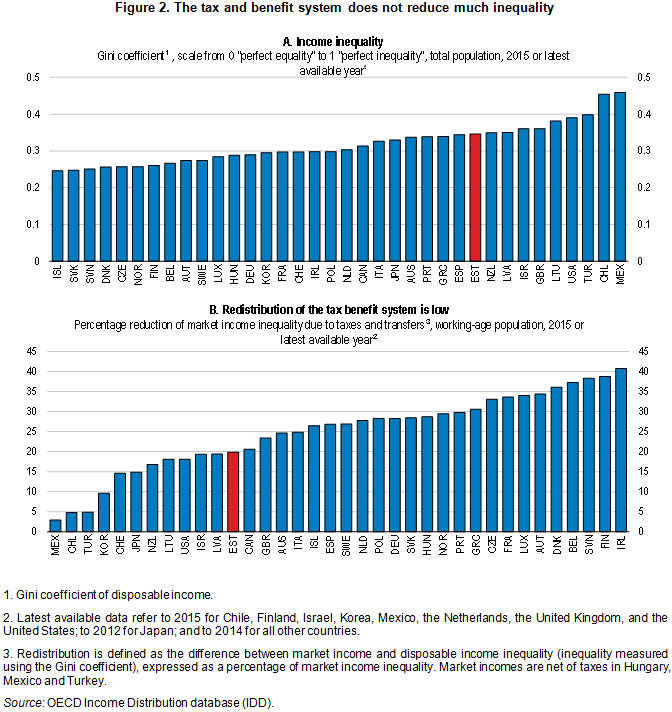 The government is already working on important redistributive measures. For instance, the planned increase in the personal income tax allowance, which is steeper at lower wage levels, will improve the progressivity to the tax system from 2018. However, the lowest income earners will not benefit from this measure since they are exempt from the personal income tax. Besides, the level of spending allocated to protection of the most vulnerable is low: around 31% of total public spending in 2014 went on social spending, some 9 percentage points less than the EU average. The targeting of social programmes is also poor, with means-tested measures accounting for a low share in total social spending.

Fiscal room is available for further measures to make growth more inclusive. Estonia has the lowest gross public debt relative to GDP in the OECD (Maastricht debt is at around 10%) and a structural budget surplus since 2009. Fiscal policy has been tight over past years, despite economic slack. The government plans a small structural deficit in 2018, 2019 and 2020, which is welcome, but the current fiscal rule imposes a return to a balanced budget in structural terms from 2021.

Beyond 2020, financing growth-enhancing measures could require revising the fiscal rule. Maintaining a small structural deficit for an extended period would not undermine the long-term sustainability of public finances. For instance, a persistent deficit of 0.5% of GDP would result in Maastricht debt reaching less than 11% of GDP in 2030 (Figure 3). In the same vein, increasing the deficit by 1% of GDP would still maintain a prudent debt level, even if coupled with 1 percentage point lower inflation and GDP growth (Figure 3).