While workers in many OECD countries are worried whether robots will take their jobs, the inhabitants of the Slovenian town of Kočevje are less concerned. In 2016 Japanese robotics firm, Yaskawa, announced plans to produce robots in Kočevje, which could create up to 200 jobs. This is a continuation of a pattern seen since independence whereby Slovenia has continued to shift from traditional manufacturing to business services and high-tech production. However, not all Slovenians have been included in this progress.

Modernisation has mainly been achieved by training young Slovenians to fill new occupations. In contrast, those with obsolete skills tend to retire or become unemployed rather than retrain, leaving Slovenia with persistent long-term unemployment, and amongst the lowest employment rates of older workers in the OECD. An ageing population means this is no longer sustainable, and labour shortages are already emerging. To meet the need for skills that complement investment in knowledge-based capital, and the new technologies brought by foreign firms, more responsive education and training solutions are needed. 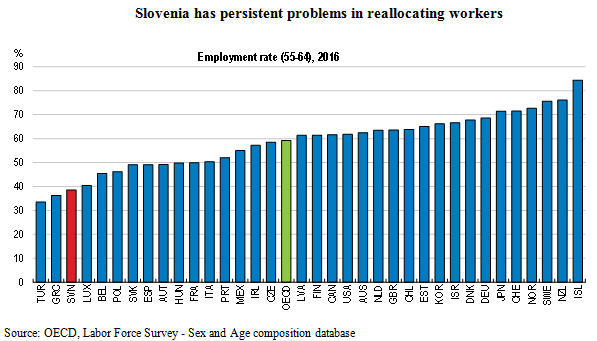 Slovenia performs poorly in terms of providing workers the opportunity to retrain later in life. While it has an effective system of vocational education, workers lack some basic skills that enable them to retrain later in life. Also, although tertiary attainment has increased rapidly, high fees for part-time students make it unattractive for older Slovenians to pursue tertiary education. There is also a lack of incentives to retrain, as wages rise automatically with age and thus do not reflect the relative demand for different occupations, and unemployment and disability insurance have served as pathways to early retirement.

The just-released OECD Economic Survey of  Slovenia outlines how a more flexible education and training system can help create a more flexible labour market. Policies such as greater problem-based learning for vocational students, more adult training, and equalising fees for part-time and full-time students can help workers adapt to future changes in the labour market. This can help ensure all Slovenians benefit from future economic growth.