The Narrow Path – The Italian View

by the Italian Ministry of Economy and Finance, Pier Carlo Padoan, Italy’s Minister of Finance, was OECD Deputy Secretary-General and Chief Economist from 2007-2014.

Growth in Italy is taking place more slowly than in other Eurozone countries. Public debate about this fact offers several explanations but rarely juxtaposes long-period trends with recent policies. 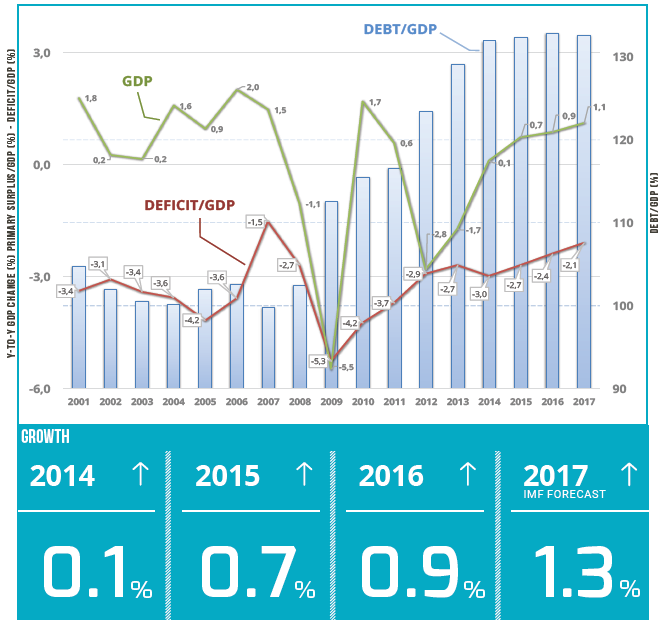 It is common knowledge that – among other things – low productivity is one of the main causes of the poor performance of the Italian economy. Red tape, the relatively limited openness to competitiveness of some professional services, the tax burden, the limited size of SMEs, and the need to improve secondary education and the efficiency of the judicial system are – among other factors – affecting our ability to grow the economy.
All such structural obstacles to stronger growth are targets of the ambitious reform program that has been under way since 2014. In the view of national authorities, structural reforms are re-shaping the economic potential of the country, while the combination of expansionary monetary policy undertaken by the ECB and appropriate fiscal policies adopted by the Government is allowing for conditions that enable the reform process.  Let’s focus on what “appropriate” means for fiscal policy in Italy at the present time.

The Government believes that a fiscal adjustment is definitely needed for a country with a debt as high as Italy’s.  However, the decision about the pace of the adjustment is crucial as it may potentially affect the prospects of the economy, including the private sector.  While a slow pace of adjustment might not be effective for the purposes of debt reduction, an adjustment that is too fast may prove to be detrimental to the economy, and therefore to the debt-to-GDP ratio.

The situation in which the Italian authorities must move can be described as a “narrow path”: on one side, high debt looms (implying exposure to external financial shocks) while on the other side an infant recovery needs to be nurtured in order to rid ourselves definitively of the double–dip recession. This picture may help in understanding the Government’s search for a balance among such divergent needs. The search has apparently been successful in the latest four budgets. Since 2014 the Italian Government has managed to reduce the deficit-to-GDP ratio – and to stabilise the debt-to-GDP ratio by that means. At the same time, the composition of both revenue and spending has been re-arranged to improve the business environment and to support internal demand.

In order to appreciate the results of the “narrow path” policy mix, we must look at the trends for debt, deficit and GDP over a lengthy period of time. Between the years 2000 and 2013, the Italian economy alternated 4 years of recession, 4 years of positive but low growth (below 1 percent), 5 years of higher growth (between 1 and 2 percent). Nothing exciting at all. After the double–dip, growth turned positive again in 2014 (a small improvement of 0.1%), then it slowly increased in the following years (+0.7% in 2015 and +0.9% in 2016). For 2017, both the IMF and the Bank of Italy forecast better growth of 1.3%. Once again, a performance that nobody will consider at all satisfactory, but certainly it’s a reversal of previous uncertain trends.

Now when we look at the trend of the deficit we can see that such growth is not the result of an expanding budget. On the contrary, it is based on a sound primary surplus and a constantly contracting deficit (which is decreasing from 3.0% of GDP in 2014 to the expected 2.1% in 2017 – and even lower according to latest forecasts). Which will allow the debt-to-GDP ratio to stabilise notwithstanding very low inflation.

The comparison with other major economies in Europe since 2009 shows that Spain, France and the UK associate growth rates higher than Italy with a negative primary balance, whereas Italian governments have managed to keep the primary balance in positive territory since 1993 (with the single exception of the year of the deepest crisis, 2009). The other large country together with Italy that manages to combine positive primary balance and growth is Germany.

The road to recovering a higher growth potential is still long, but some of the reforms are beginning to bite. To mention some examples, the labour market is now more dynamic, thanks to the Jobs Act introduced early in 2015; cooperation between taxpayers and the tax administration is improving, as the principles of cooperative compliance and preventive assessment of tax planning are becoming common behaviour; the Italian customs rank #1 in the “Trading Across Borders” study (a component of the World Bank’s Doing Business project) due to extensive digitalisation.

The fiscal stance adopted for the last four budgets has contributed to alleviating the upfront costs associated with the introduction of reforms, and therefore to create favourable conditions for reforms to be accepted by all stakeholders. Currently, public investment in strategic infrastructure is rising, the tax burden on both families and business has been cut, and selective tax breaks have stimulated private investment in innovation.

At the same time, the stock of nonperforming loans is now declining. The NPLs have been a consequence of the crisis, but also contributed to its worsening, as they have limited the flow of lending from banks to the economy. The increase in lending to the real economy, along with new financial instruments introduced by the Government in recent years (for instance mini-bonds and individual savings plans focusing on SMEs) will sustain the recovery, which will reinforce the soundness of public finances.

The outlook is for an increase in the real growth rate combined with higher inflation, a continuing primary surplus and modest implicit debt (thanks to past pension reforms), all leading to a decline in public debt.