Despite strong economic growth, Costa Rica’s income inequality has increased in the past decade, in stark contrast with other Latin American countries (OECD, 2016 and González Pandiella and Gabriel, 2017).

What explains this? A decomposition of income inequality by income sources reveals, surprisingly, that public sector wages are largely behind the country’s high level of income inequality (Figure 1). High wages paid to those employed by public agencies outside the central government contributed the most. Inequality has also been driven by large and increasing skills premiums in the private sector. Workers holding a tertiary degree earn, on average, nearly four times as much as those with only primary education. Social programmes, such as non-contributory pensions, help to reduce inequality, but their impact is limited given their small share in households’ total income. 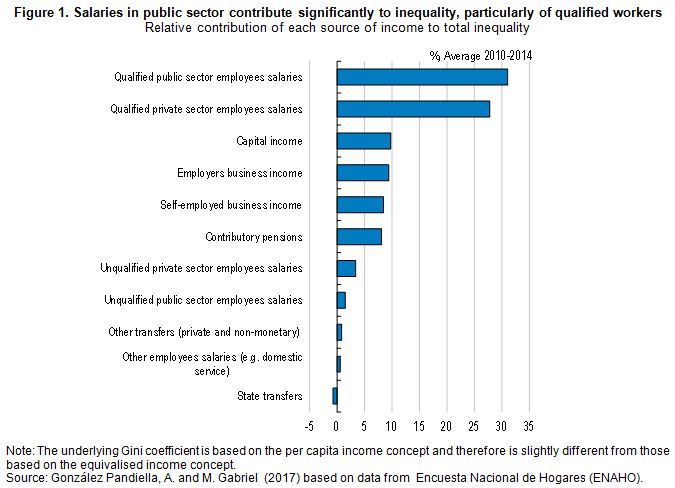 What to do about it? One fundamental advantage of decomposing inequality by income source is that it allows quantifying how marginal changes in a particular income source would affect overall income inequality, which can be useful to guide policies. For Costa Rica, the largest reduction in inequality would come from an increase in wages of low qualified workers in the private sector (Figure 2). Hence, progress to ensure a higher compliance with the minimum wage level would help to reduce inequality. Given that the Costa Rica’s minimum wage system is complex (OECD, 2016), a simplification of its structure would facilitate compliance. A more comprehensive strategy to reduce informality, which is increasing and affects predominately low-qualified workers, would also help to curb inequality. 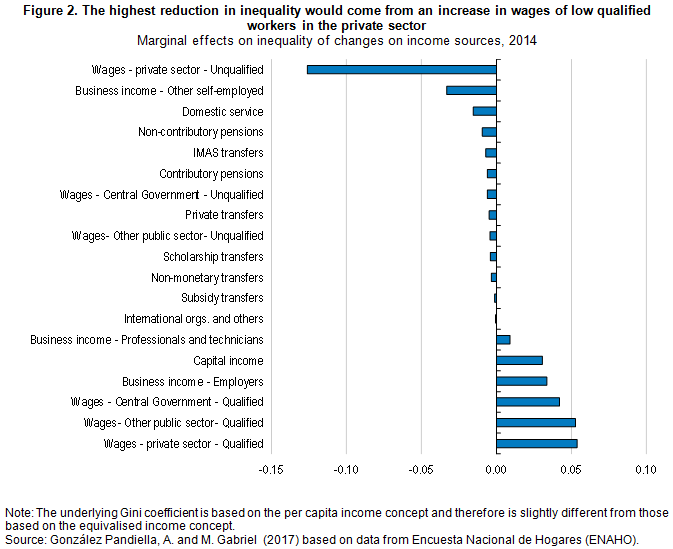 On the other hand, increases in wages of qualified workers in the public and private sectors would result in the highest increase in inequality. Hence, further increases in public wages of qualified workers do not seem optimal from an inequality perspective. In the private sector, strengthening the links between education and the labour market would help to reduce existing high skills mismatches (Gonzalez Pandiella, 2016) and would also contribute to lower inequality by reducing skill premia.