Making the most of innovation in China

On several measures, China has caught up with OECD economies in the area of innovation.

On the input side, R&D spending as a percentage of GDP has reached 2% (Figure 1), on par with major European countries. This is more than in other middle-income countries such as Mexico, Turkey or Chile do, though still much less than in the leading innovators such as the US, Japan, or Korea. 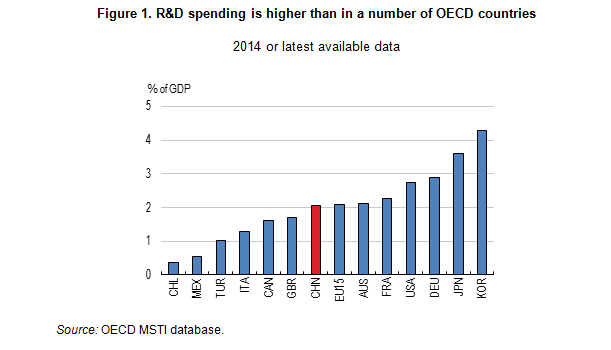 On the output side, measured by the number of patents, China has become a global leader, surpassing the United States in 2015. In that year, China’s patent filings exceeded one million ‒ over a third of the world’s total. Another indicator, the share of new products, points in the same direction (Figure 2). The share of new products is high and increased markedly in several high-tech industries such as computer or electrical equipment manufacturing. 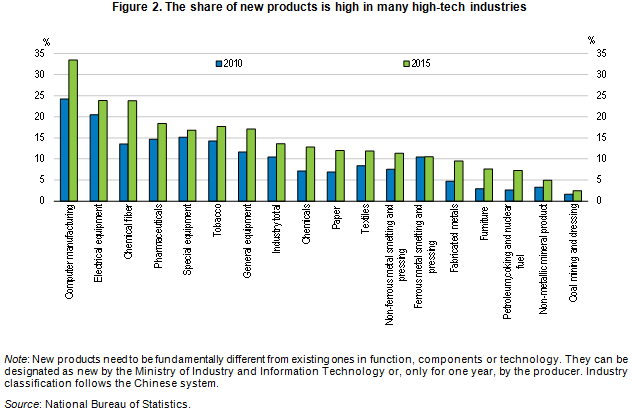 When digging under the surface, however, it turns out that the elasticity of patenting with respect to R&D spending is small. On average, the impact on productivity of new patents has declined, though private firms appear to achieve greater productivity gains from their R&D efforts.

This largely reflects quality and relevance issues. Most Chinese patents are utility or design patents and only a smaller share are genuine inventions. And while China is registering an increasing number of patents in other countries, these are only a fraction of the total. On this measure, China lags behind most OECD and many emerging economies (Figure 3). 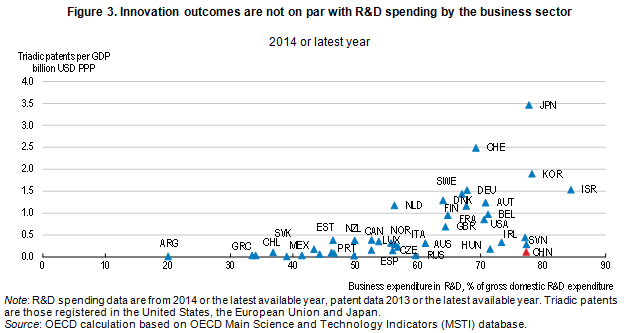 As the 2015 OECD Economic Survey of China pointed out, the utilisation rate of university patents is low at around 5% compared to 27% in Japan for example. In contrast, for firms it approaches nearly two-thirds, comparing well with other countries. A successful example of increasing utilisation is the applied laboratory for nanotechnology under the Chinese Academy of Sciences established in 2015.

Innovation and the diffusion of its benefits are hampered in China by limited collaboration across firms, as shown by the patent survey by the State Intellectual Property Office. In the Chinese ecosystem of innovation, vertical linkages or interactions with suppliers and customers are well established but horizontal linkages are more limited. Most R&D projects are carried out by the firm alone, collaborative projects with research institutions are rare and with other firms even scarcer. This silo effect is detrimental to potential spillovers and the exploitation of complementarities across firms.

Weak protection of intellectual property rights (IPR) has hampered innovation and patenting in China. Companies often do not bother registering patents: two-thirds of them think that patent rights cannot effectively prevent others from copying their inventions. According to a country-wide representative survey of patent holders by the State Intellectual Property Office, 18% of patent owners have experienced a violation of their rights, but 37% of them did not take any measure in response. The problem is especially acute for micro-enterprises. Domestic firms are more likely not to respond than foreign-invested firms. Over half of the firms think that better protection by patent rights would effectively stimulate innovation at firm level and 87% say that IPR protection should be strengthened. In addition to IPR protection, most firms try to (i) reap the first-mover advantage by quickly marketing their invention, (ii) sign confidentiality agreements with staff or (iii) change products quickly so that competitors cannot catch up.