Will risks and financial vulnerabilities derail the modest recovery?

Global growth is projected to pick up to around 3½ per cent in 2018, from just under 3% in 2016 in our latest Interim Economic Outlook. The forecast modest recovery is supported by fiscal initiatives in major economies and broadly unchanged from the November Economic Outlook. While the pick-up is welcome, it would still leave global growth below the historical average of around 4% for the two decades prior to the crisis.

This comes against the background of a five-year period where the global economy has been stuck in a low-growth trap. Consumption, investment, trade and productivity are far from strong and inequality is rising. Productivity gaps between frontier firms and laggard firms have widened, contributing to a growing income gap as wages have stagnated at less productive firms.

Moreover, financial vulnerabilities and policy risks could derail the modest recovery. There are apparent disconnects between the positive assessment reflected in financial market valuations and forecasts for the real economy. For example, equity prices have increased significantly over the past six months, despite the large rise in nominal interest rates and with long-term real GDP growth and inflation expectations barely changed.

The global interest-rate cycle turned in mid-2016. Some normalisation of interest rates as a result of rebalancing demand support from monetary to fiscal policy is welcome. However, the market response to higher rates, following a prolonged period of exceptional monetary stimulus and low yields, may not be smooth. Market expectations imply a rising divergence in short-term rates between the major advanced economies in the coming years. This creates risk of exchange rate volatility, which could lead to wider instability in financial markets.

Risks to emerging market economies are high, including from high and rapid growth in private credit, notably in China, and rising non-performing loans, particularly for India and Russia. Many emerging market economies are also vulnerable to external shocks and currency mismatches, particularly those with high levels of overseas borrowing or those with a mismatch between foreign currency denominated debts and export revenues. 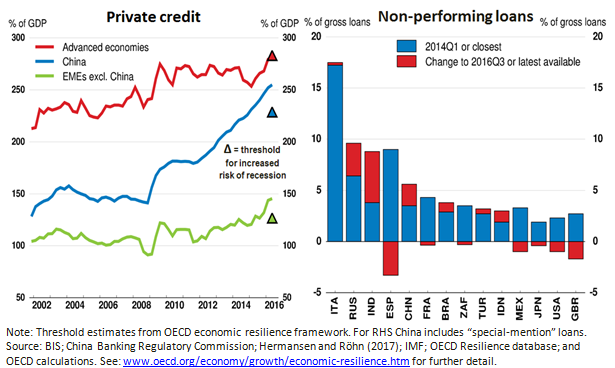 There is now significant uncertainty about the future direction of trade policy globally, in part because of falling public support for trade linked to disparities in outcomes across industries, workers and regions. But as I have written previously, trade matters for productivity, living standards and inclusive growth. More efforts are needed to strengthen domestic social protections, invest in human capital, promote skills and provide support for workers in transition which supports trade openness, and helps to maximise the gains from trade and ensure the benefits are shared. A roll-back of trade openness, on the other hand, would be costly for global GDP and the large number of jobs linked to global value chains.

Policy needs to manage these risks, strengthen growth and ensure it is more inclusive. Countries should use increased fiscal space to implement effective fiscal initiatives that boost demand and make government taxes and spending more supportive of long-term growth and equity. Most countries have room for additional fiscal initiatives to boost growth and employment and enhance inclusiveness without compromising debt sustainability.

A durable exit from the low-growth trap also requires greater political commitment to implement policy packages to boost inclusive growth. However, as shown in our forthcoming OECD Going for Growth 2017 (to be released on 17 March), the pace of reform has continued to decline in recent years. Reforms can be more effective and draw greater political support if implemented together, for example with actions to develop skills, remove barriers to competition and trade, and improve labour markets to raise incomes and share the gains widely.