With the global economy stuck in a low growth trap, it is crucial to understand the factors behind the weak recovery in potential output growth, and particularly the barriers to productivity growth. New research shows that this dynamic can be partly understood in terms of the increasing survival of zombie firms – i.e. those firms that would typically exit in a competitive market but are being kept alive by creditors or policy weakness. Today, a key risk is that zombie firms may depress creative destruction, crowd-out growth opportunities for healthy firms and underpin a period of macroeconomic stagnation, just as they did in Japan in the 1990s (Caballero et al., 2008).

In a number of countries, the prevalence and productive resources sunk in “zombie” firms – defined as old firms that have persistent problems meeting their interest payments – has risen since the mid-2000s (Figure). In Italy, for example, the share of the industry capital stock sunk in zombie firms rose from 7% to 19% between 2007 and 2013. This is problematic because zombie firms can congest markets and reduce industry profitability – by inflating wages relative to productivity and depressing market prices – which deters the expansion of healthier firms, especially recent entrants. 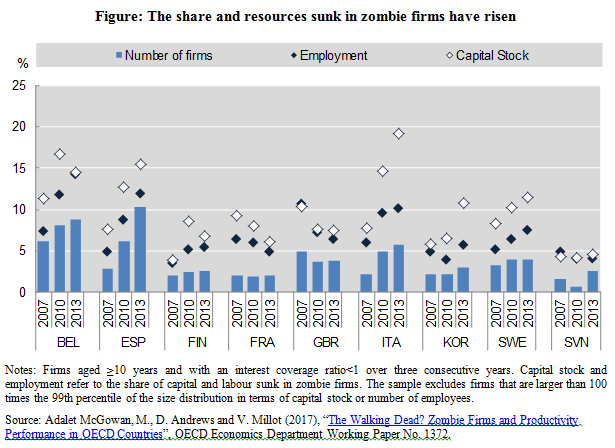 The rise of zombie congestion can be connected to the collapse in OECD potential output via two key channels: weaker business investment and MFP growth. For example, simulations show that had the zombie capital share not risen from its pre-crisis levels:

In some countries, these problems are likely to be symptomatic of weak insolvency regimes and a slowdown in the pace of product market reforms. But zombie firms may also be kept alive by bank forbearance and the persistence of crisis-induced SME support policy initiatives. While reforms in these areas may help revive productivity growth, it is crucial that they are flanked by well-designed active labour market policies, which have been shown to be effective at returning workers displaced by firm exit to work (see recent Ecoscope blog).