Does growth lead to inequality? It depends.

Widespread increases in inequality over the past three decades have raised the question of whether growth in itself is a driver of income inequality. Considering that correlation often tells little about causation, this question is less trivial than may appear at first glance. Indeed, the concomitant rise in GDP per capita and income inequality does not, per se, imply any causal relationship from the former to the latter. Research efforts have offered mixed conclusions so far and the growth and inequality question has been at the centre of a long-standing controversy among economists (Dollar et al. 2015). New OECD research by Hermansen et al. (2016) shows that in order to provide a convincing answer, the question needs to be framed more specifically.

Using a novel empirical framework, Hermansen et al. (2016) shed new light on the old growth and inequality nexus by assessing the impact of growth on household incomes across the distribution, that is, progressively encompassing poor, middle class and rich households. Their conclusion is that that there is no single answer to the growth and inequality question. Labour productivity growth is found to have contributed to rising market income inequality, while this was partly mitigated through government redistribution, on average across OECD countries over the past three decades (Chart 1, Panel A). By contrast, employment growth is found to have had an equalising impact, benefiting mostly and importantly households in the lower part of the income distribution (Chart 1, Panel B). Overall, these two forces have tended to offset each other and resulted in a broadly distribution-neutral impact of GDP per capita growth, on average across OECD countries over the last three decades. So, with reducing inequality remaining a defining challenge of the post-crisis era, promoting job creation is a key policy goal, in particular where employment rates still fall short of pre-crisis levels. But, perhaps more importantly, in looking for ways to revive productivity growth, governments need comprehensive policy strategies to ensure that the gains are more broadly shared across the population. 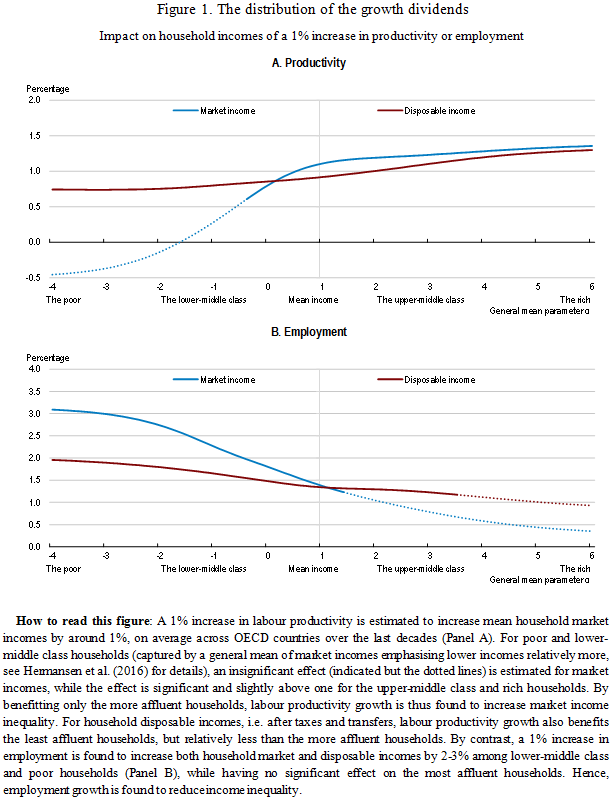