Mexico’s reforms are paying off, but there is much left to do

The overall economic and social situation has improved in recent years, but important challenges remain, such as high levels of poverty, extensive informality, low female participation rates, insufficient educational achievement, financial exclusion, weak rule of law, and persistent levels of corruption and crime. To address these problems, the government has rolled out major structural reforms since 2012 aimed at improving growth, well-being and income distribution. The initial wave of reforms, kicked-off by the multi-partisan political commitments in the Pacto por México, led to notable progress across a range of areas and put Mexico at the forefront of reformers among OECD countries. Key laws and constitutional amendments were approved, and secondary laws or regulations passed. 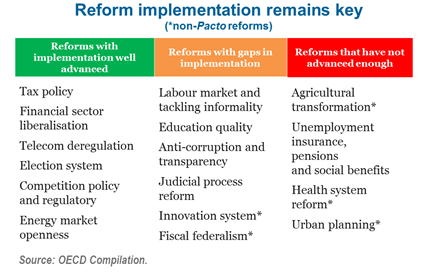 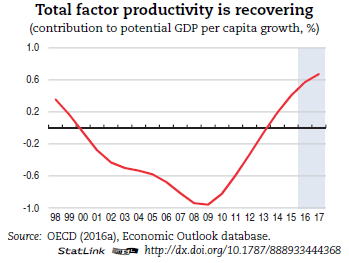 rnal headwinds such as lower oil prices and rising US interest rates. The OECD estimated in the last Economic Survey that a subset of the Pacto por México reforms could add one percentage point to GDP growth after five years. An additional set of selected reforms could add another percentage point to GDP. Strong progress has been made to open sectors such as energy and telecoms to more competition. Institutional designs have been improved with a new National Productivity Commission, a strengthened competition authority, and expanded sectoral regulators. Initial progress has been made with education and poverty alleviation, although parts of these plans ran into difficulties that are now being addressed. 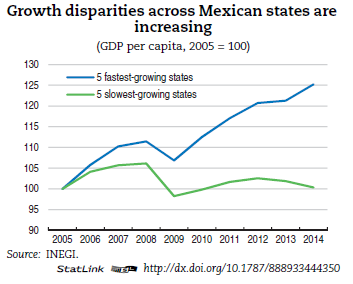 Nonetheless, large differences prevail across sectors, states, and firms – a situation not unlike that in many OECD countries. Mexico’s most productive firms are performing well, such as in the sector of transportation equipment manufacturing, but the majority of firms are still struggling to perform better, leading to a growing dispersion in productivity,  with a few leading sectors pulling ahead. Inequalities continue to grow across states and sectors, emphasising the divergence of a modern Mexico – highly productive, competing globally, mostly located at the border with the United States, in the central corridor and in tourism areas; and a traditional Mexico, less productive, with small-scale informal firms, mostly located in the South. As a result, growth has not been inclusive enough to achieve better living conditions for many Mexican families.

Addressing this divergence is the main focus of the new Economic Survey (OECD, 2017).