Malaysia has sustained rapid and inclusive economic growth for close to half a century, as documented in the OECD’s first Economic Assessment of Malaysia (OECD, 2016). Real GDP growth has averaged 6.4% per year since 1970, outperforming most of its regional peers (Figure 1). In the process, the Malaysian economy has undergone a dramatic transformation from dependence on agriculture and commodity exports to a more diversified and open economy with strong links to global value chains. Growth has been driven by a series of structural reforms that began in the 1970s. Malaysia harnessed its favourable geographical location on global trade routes to promote export-oriented industrialisation, encouraging regional integration through a relatively open environment to trade and investment. This has facilitated the development of manufacturing, boosting growth, employment and productivity by expanding access to global markets, capital, knowledge and technology. More recently, real GDP growth averaged 5.3% per year between 2011 and 2015, led mainly by domestic demand, with the services sector now representing more than half of GDP. 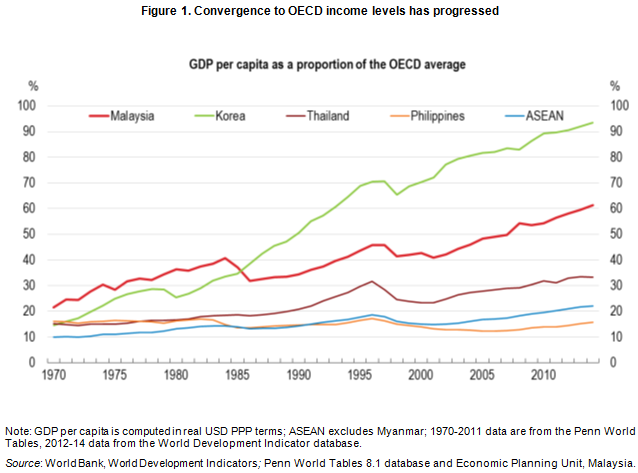 Malaysia’s aspiration to attain high-income country status involves striving for greater inclusiveness. It scores well on some indicators in the OECD Better Life Index, in particular long-term unemployment. However, the index illustrates relative weakness in areas such as educational attainment and skills, as well as personal earnings. It also highlights the need to further improve healthcare to increase healthy life expectancy (Figure 2). 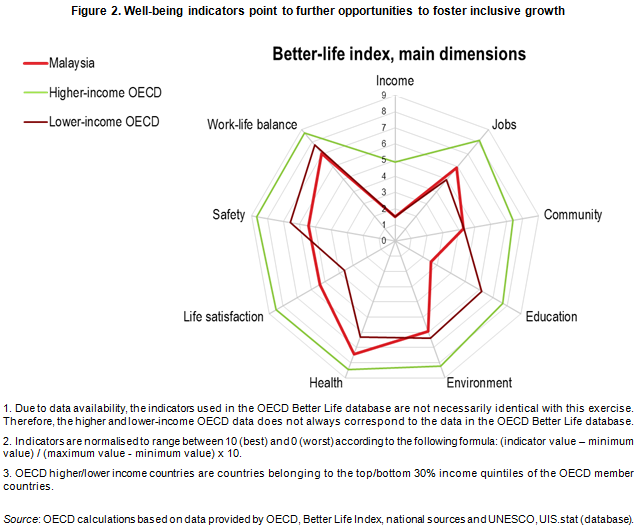 In the face of external headwinds, growth slowed down to just over 4% year-on-year in the first half of 2016 but is projected to remain resilient at around this pace in the remainder of 2016 and in 2017 thanks to the continuing strength of domestic demand, even though momentum will be held back by the subdued pace of the global economy and still low commodity prices. Trade will continue to grow at a slower rate than GDP in line with slowing global trade, which affects the growth potential of trade-exposed emerging market economies like Malaysia (134% of GDP in 2015).

The balance of risks to growth is tilted to the downside and stems mainly from external factors. A more rapid than foreseen normalisation of United States monetary policy would entail a downside risk to the projections, as open emerging market economies such as Malaysia are vulnerable to capital outflows. While Malaysia has diversified its economy and reduced its dependence on oil for government revenue, 19% of exports were agricultural and mining goods in 2015 and around 15% of government revenue is still oil-related in 2016. Thus, if commodity prices were to fall further, the trade balance, corporate profits and fiscal revenue would be negatively affected. On the upside, higher crude oil prices, accelerating inflows of tourists from Asia, or higher-than-forecast palm oil prices if unfavourable weather conditions continue to affect production, could see growth exceed projections.