By Douglas Sutherland, Head of US Desk, OECD Economics Department

With the global economy mired in low-growth and no signs of strong acceleration, a lot of attention has been paid to the meagre pace of productivity growth in OECD countries. In the United States, the most watched indicator of productivity (nonfarm business productivity growth) decelerated about ¾ percentage point from 2009 to 2014 relative to the preceding 5-year period. This is not just the result of the crisis holding back investment. Productivity growth had already been slowing from the early 2000s.

Economic research reveals competitive markets stimulate productivity: faced with competitors, firms survive by becoming more efficient and bringing new products to the market. Competitive markets see a lot of firm entry and exit. However, this dynamism has declined: new firms are not being created as frequently as in the past (See figure, top panel) and the most productive of these firms are not growing as fast as they once did. This matters because advances in productivity typically result from the rapid growth of young dynamic firms. Instead, start-ups appear to be failing more often and the remaining firms are getting older with larger firms increasingly dominating markets (See figure, bottom panels). 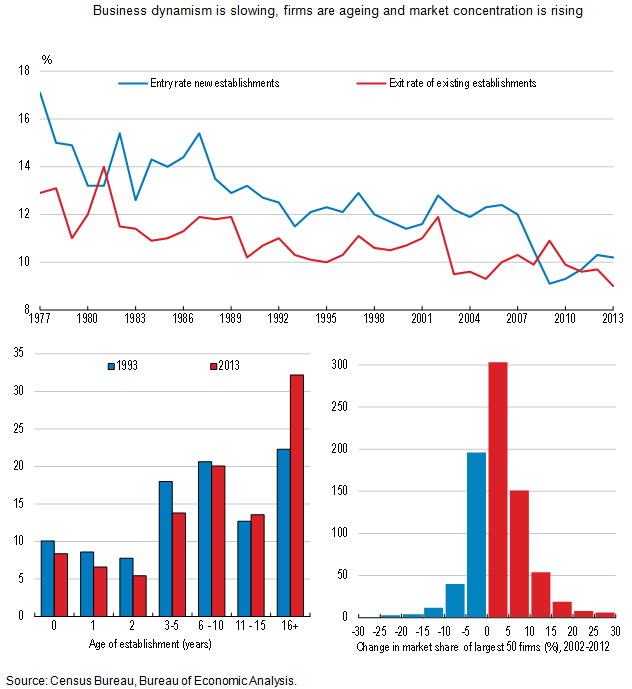 When this happens, markets become more concentrated, with large incumbent firms gaining market power. This has many disadvantages because gains in productivity are not being passed onto consumers in lower prices or to workers in higher wages. The US is often considered as a very competitive and dynamic marketplace – and it is to a large extent – but it has become less so for some time because of developments such as digitalilisation facilitating “winners take all” and anti-trust becoming less stringent than it used to be. Faced with these worrying trends, competition/anti-trust policy needs to adapt. This is particularly the case in markets transformed by digitalisation, financial innovation and globalisation – such as e-commerce and those dependent on access to information. The decline in business dynamism sometimes comes from barriers to competition being erected by the States. For example, state-level prohibitions on municipalities creating their own fixed broadband networks have hindered the development of stronger competition in this sector. In other cases, States have blunted competitive pressure through imposing state-specific occupational licensing requirements. As a result dynamism and competition can vary across states because of the importance of local administration in regulating markets with some states being very dynamic whereas others are not.

Amongst other factors, changes to bankruptcy laws have also contributed to more sluggish business formation. Reforms in 2005 increased the cost of bankruptcy for failed entrepreneurs and made it more difficult for them to try again (see the recent Ecoscope blog on the importance of this for productivity growth). The reforms appear to have stymied the creation of sole proprietorships and partnerships, particularly in States that do not exempt some of the entrepreneur’s assets from bankruptcy proceedings. Given the importance of bankruptcy for long-run prospects, a better balance needs to be struck between supporting entrepreneurship and creditor rights.