The growing role of global value chains (GVCs) in international production processes is of critical importance for Turkey’s development. Participation in GVCs is one of the key drivers of successful productivity diffusion in a globalised world. Despite major progress, Turkey still lags behind most comparable countries in terms of exported value added per capita.

Backward integration, that is the use of foreign inputs to produce final and intermediate goods exported by Turkish firms, often entails import competition, in particular in manufacturing and services, and accelerates the reallocation of domestic resources towards the most competitive firms. Backward integration also facilitates the diffusion of knowledge either indirectly through learning from suppliers or directly via knowledge spillovers from foreign direct investment.

Forward integration, that is the production of intermediate inputs used in other countries’ exports, increases and diversifies the potential market, leverages the use of Turkey’s human, capital and natural resources, and, as a result, contributes to rebalancing the Turkish economy. Increased production for foreign markets requires convergence of product standards toward international best practices and triggers virtuous feedback loops between productivity, innovation, human capital endowment and living standards.

While Turkey incorporates an increasing share of foreign value added in its own exports (backward participation), its capacity to provide intermediate inputs to other countries’ exports (forward participation) is still limited (see Figure). 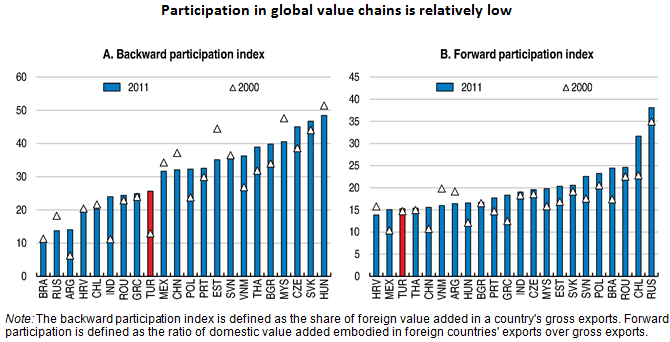 The 2016 OECD Economic Survey of Turkey argues that Turkey’s participation in GVCs remains below potential owing to institutional features that hamper efficient allocation of capital and labour, obstacles inherent in bilateral trade agreements and entry regulations, underdeveloped human capital and insufficient investment in innovation, R&D and knowledge-based capital. The Survey further identifies substantial room for progress in corporate governance and managerial skills, as well as the use of ICT tools in production and management processes.

Progress along these dimensions would make Turkish firms more competitive, strengthen Turkey’s backward and forward trade linkages and contribute to rebalancing growth. The adjustment process towards a more export-oriented economy operating on a level playing field needs to be flanked by dedicated industrial, social and environmental policies to alleviate adverse consequences on displaced firms and workers and the ecosystem.