A dynamic small business sector can heighten competition and underpin productivity growth, as discussed in the 2016 OECD Economic Survey of Canada and Carey et al. (2016, forthcoming). Dynamism tends to be reflected in high start-up rates and strong ‘up-or-out’ dynamics. Entry can be viewed as a form of experimentation that introduces new ideas, business models and technologies into the marketplace while exits can be viewed as the end of unsuccessful experiments. High start-up rates increase both the likelihood of radical innovation and competitive pressures on incumbents to innovate. OECD (2015) finds that an increase in the share of firms younger than six years old relative to firms aged 12 years and over is associated with higher multi-factor productivity growth and that this effect is mainly attributable to start-ups.

Firm entry and exit rates (which are highly correlated) have been falling since the early 1980s (Figure 1, Panel A) in Canada as in other countries. Canada’s start-up rate appears to be relatively low by international comparison (Panel B), while the share of older small firms is relatively high (Panel C). The relatively low share of younger SMEs (Panel C) may point to weak dynamism, as it is these firms that contribute disproportionately to job creation, destruction and net employment growth (Figure 2), not SMEs in general. 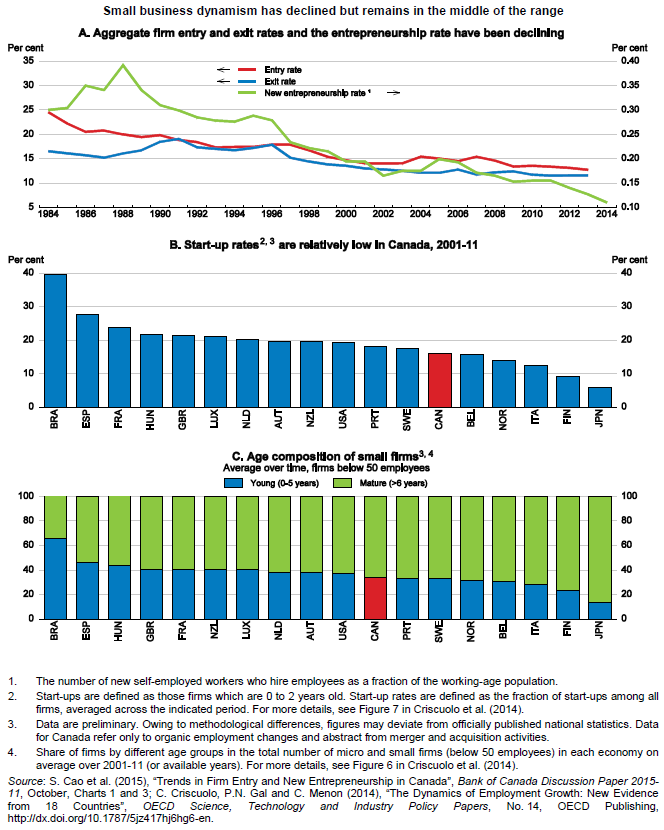 Canada’s framework policies, such as product and labour market regulation, are generally supportive of small business dynamism. Labour market regulation, in particular, poses few barriers to the reallocation of labour, which is critical for a vibrant small business sector. Likewise, product market regulation generally does not obstruct resource reallocation from less to more efficient firms. An exception is Canada’s relatively high barriers to foreign direct investment. Such barriers inhibit allocative efficiency. Another is its high regulatory protection of incumbents, which arises from an above-average use of anti-trust exemptions.

Small business dynamism and productivity would also benefit from focusing small business programmes more clearly on market failures. The most costly programme is the preferential tax rate for small companies (the Small Business Deduction). It is intended to overcome a capital market failure, which starves SMEs of funding, by leaving beneficiaries with more after-tax profits to invest. However, the economic literature on capital market failures does not establish a case for subsidising SMEs based on their size alone. The 2010 UK Mirrlees Review of taxation concluded that there was no evidence of any general capital market failure affecting small firms but rather of a financing gap for new and start-up firms that could be more effectively addressed through targeted measures (Crawford and Freedman, 2010). Canada’s SME financing programmes should be reviewed to identify clear capital market failures and the best instruments for addressing them. For the preferential federal small company tax rate, this should be done in the recently announced federal tax expenditure review.

The other high-cost measure whose review should be a priority is the higher (refundable) R&D tax credit for small companies than for other companies. It is not clear from the economic literature whether market failures warrant a higher or a lower subsidy rate for SMEs than the standard rate: information failures that make it more difficult for SMEs to obtain external finance for innovation justify a higher rate while lower SME R&D spill-overs point in the opposite direction. To resolve this and other R&D subsidy issues, such as the appropriate balance between direct and indirect support and level for the standard tax credit rate, Canadian governments should evaluate R&D subsidy policies to ensure that they are providing good value for money. 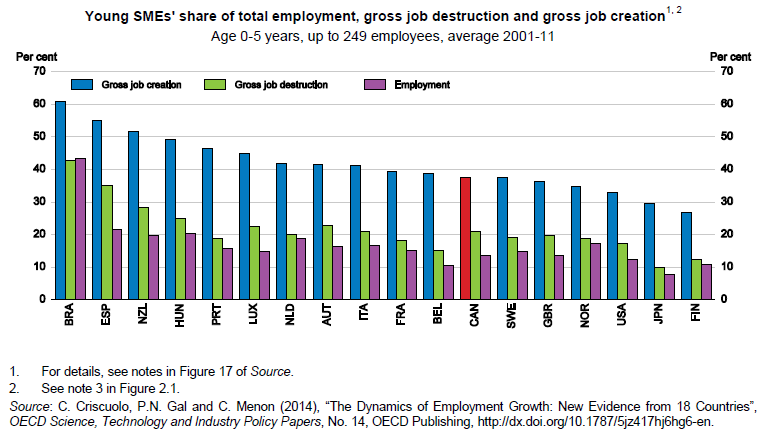