The Greek economy is turning around lately, but it remains in a deep depression. GDP has fallen by more than a quarter between 2007 and 2015, unemployment remains extremely high at 25 percent and anchored poverty – which measures poverty relative to its pre-crisis income level – has nearly tripled between 2007 and 2014, reaching a third of the population. According to our latest OECD Economic Outlook, growth in 2016 will be slightly negative (-0.2%) and pick up to 1.9% in 2017. Unemployment will remain high and wage growth muted.

If the upcoming negotiations with its European creditors reduce Greece’s debt burden, greater confidence and less fiscal headwinds would support investment and a stronger cyclical recovery.  However, policy makers in Greece cannot rely only on a cyclical rebound if they want to overcome the profound costs of the crisis and provide better lives for their citizens.  OECD estimates show that the prolonged depression has reduced the long-term potential growth of the Greek economy by 2 percentage points. This means that without reforms to raise investment and productivity it would be extremely difficult to achieve pre-crisis living standards in a reasonable timeframe. More importantly, unemployment would remain at very high levels, as long unemployment spells have led to significant scarring effects in the labour market (OECD, 2016).

In a recent paper, we show that Greece has implemented significant labour market reforms, but less progress has been achieved on reducing oligopoly power, on simplifying the regulatory burden and on addressing weaknesses in the public administration, due to administrative capacity constraints, weak ownership of past reform programmes and vested interests. Our estimates show that changing the mix of structural reforms towards raising competition in product markets and improving general framework conditions for doing business, could boost GDP by around 13% over the next decade if implemented fully.

Index scale 0 – 6 (least to most restrictive) 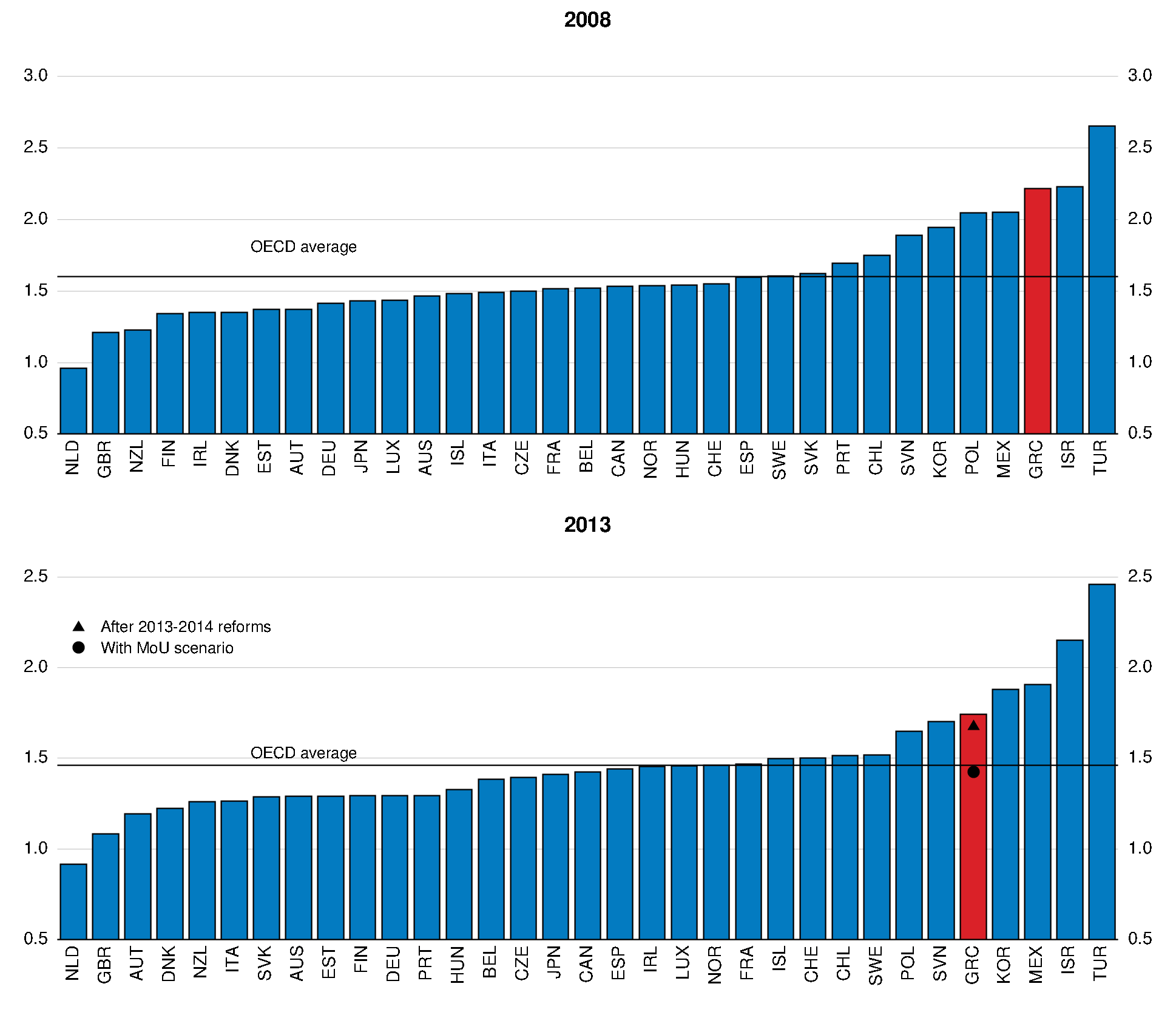 Note: The MoU scenario represents the estimated level of the PMR index under full implementation of product market reforms included in the Memorandum of Understanding of the August 2015 ESM agreement. See Daude (2016) for details.
Source: OECD (2015) Product Market Regulation database and OECD calculations.

Further product market reforms are crucial to increasing productivity and getting investment started again. Although reforms so far have moved Greece close the OECD average in restrictiveness of product markets, there is still significant room for improvement, even if the current memorandum of understanding (MoU) is fully implemented. Regulations in network sectors remain restrictive. In particular, in rail and road transport, as well as electricity and gas, a combination of public ownership, barriers to entry and a significant vertical integration create relatively high costs that undermine the competitiveness of the rest of the economy.

At the same time, reforms that improve the business climate, the functioning of the judiciary, tax administration and the overall effectiveness of the public administration are needed. The OECD is currently working together with the Greek government on several of the reforms needed. The challenges are significant, but a more balanced reform package and better implementation could not only contribute to a more inclusive recovery but also create stronger public support for reforms and greater ownership to modernise the Greek economy.