Over the last decade, Poland has significantly upgraded its infrastructure network, and public investment has risen rapidly (Panel A). However, bottlenecks still weigh on productivity growth and environmental and health outcomes, and the perceived quality of transport and energy infrastructure remains lower than in most OECD countries (Panels B and C). The EU 2014-20 programming period is an opportunity to improve the management of investment, as structural and cohesion funds that assist in the financing of numerous infrastructure projects are set to reach nearly 3% of 2013 GDP per year (Panel D). 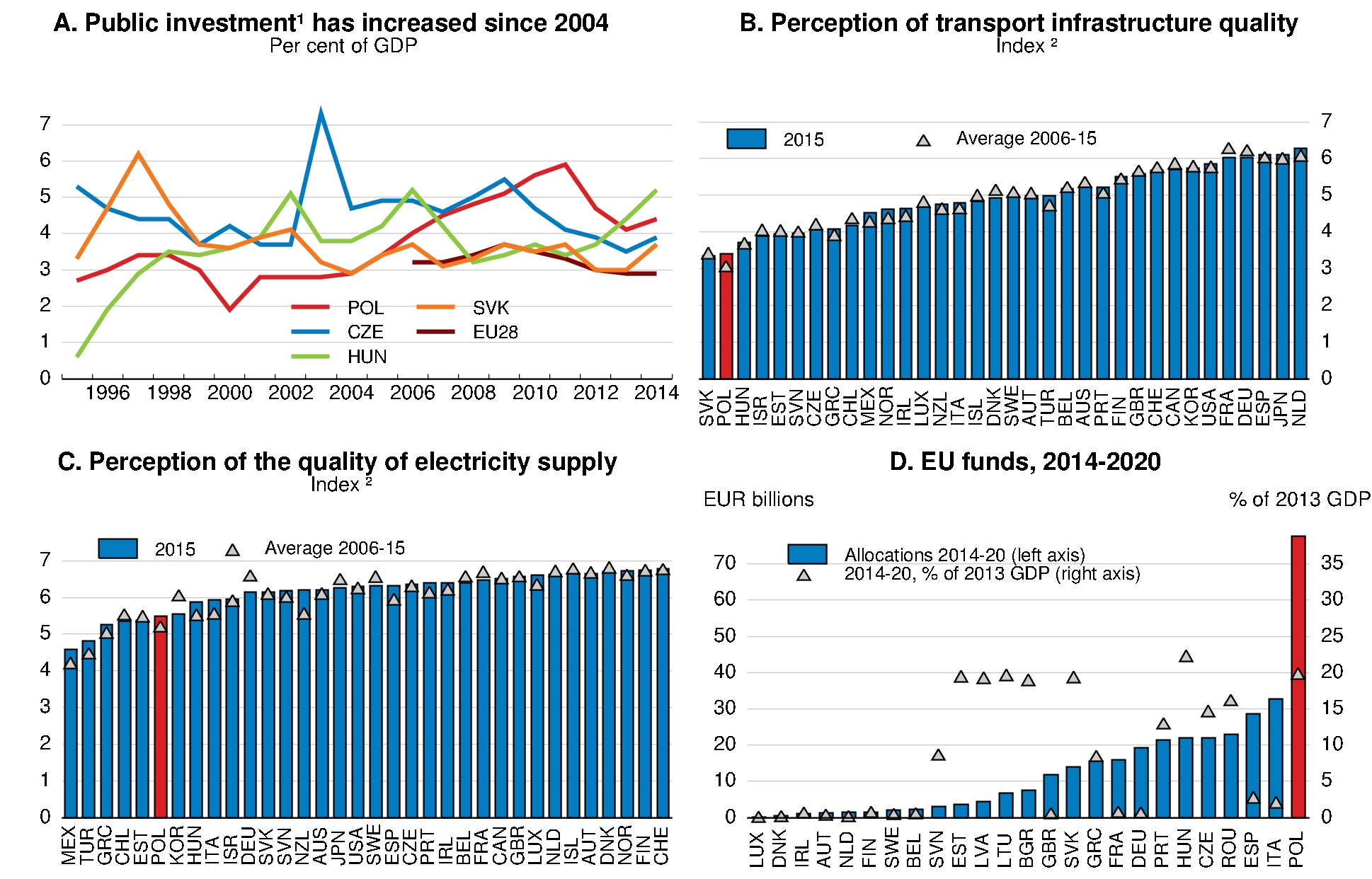 Sub-central governments were responsible for about half of total public investment in 2014, above the OECD average and most other Central and Eastern European countries. As in other OECD countries, municipalities design legally binding local land-use plans. However, the quality of land administration appears relatively low (World Bank, 2015), and around 70% of the municipal territory lacks local spatial plans. Local governments have far-reaching responsibilities in transport and energy policies, but the quality of investment outcomes still needs to improve (OECD, 2015 and 2016).

The decentralisation of the allocation of EU funds over 2014-20 will give an even more prominent role to local governments, and there is a need to increase their administrative capacity, accountability and resources. The OECD (2016) analysis highlights three main areas of reforms:

The authorities have done much to adopt general investment strategies across all levels of governments. However, they are relatively recent and will need regular updates. At the metropolitan level, administrative fragmentation has partly obstructed effective land use planning and transport investments, thereby increasing urban-sprawl and congestion, and reducing a city’s attractiveness for individuals and businesses. A welcome recent law foresees the creation of metropolitan governance associations in 2016, notably for transport and spatial planning, but these will remain voluntary. New mechanisms under the 2014-20 EU perspective would also strengthen coordination in infrastructure delivery. In addition, before the recent elections, a draft law was intended to reduce barriers for municipalities to develop local land use plans, and this reform needs to be resumed swiftly.

Funding of local infrastructure management agencies is provided through central-government transfers fixed annually in the budget process, without reliable long-term commitments. The authorities should pursue reforms of public infrastructure pricing to ensure that long-term costs, including environmental and health externalities, are fully recovered. Road pricing could be expanded to ensure effective competition between transport modes and encourage green investments. In particular, the current legislative framework prevents local authorities from setting congestion fees or urban tolls, while such measures may be especially suitable for addressing congestion and local environmental impacts.