As asset prices have risen in recent years, so have concerns that monetary policy, and quantitative easing in particular, has increased inequality. Concern has moved from being the preserve of central bankers and the pages of the financial media to entering popular discourse with calls for “People’s QE” in the United Kingdom. However, recent research shows that not only are the impacts via financial channels of such policies on inequality small, they even have the potential to reduce it.

Monetary policy effects on inequality are ambiguous in theory. A fall in interest rates reduces debt servicing costs and returns on financial assets and may increase, reduce or leave unchanged income inequality. The impact depends on the relative size of variable-rate liabilities and interest-paying assets, or the ease at which rates can be re-negotiated, and on differences in the distributions of income, assets and liabilities. Similarly, an increase in asset prices has an uncertain impact on the inequality of net wealth (households’ assets minus liabilities). As poorer households tend to have high debts in relation to assets, their net wealth stands to benefit most from asset price increases.

Interest rate cuts have a small impact on income inequality in advanced economies. Simulations show that the Gini coefficient – a popular measure of inequality – for the income distribution increased in all the countries studied, except the United States, as a result of a 4-percentage point reduction in interest rates. However, this was only a tiny fraction of the overall changes in the Gini coefficient observed during the Great Recession for all the countries except Belgium and Germany (Figure 1). Moreover, these inequality-raising effects of monetary policy could have been partially, or even more than fully, offset by the stabilising effects of monetary easing on employment that benefit low-income workers disproportionally. 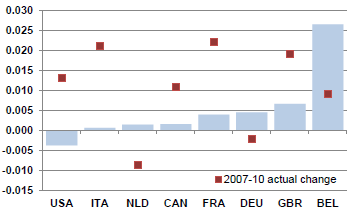 Likewise, asset price changes are unlikely to have had a large effect on net wealth inequality. Even if asset valuations vary by as much as they changed during the Great Recession, it would not alter the Gini coefficients for the net wealth distribution significantly in most of the countries analysed. Moreover, the reversal of asset valuations since 2010 suggests that net effects over the business cycle are even smaller. The muted overall impact of changes in asset prices is in part due to rising house prices generally reducing net wealth inequality and thus offsetting the inequality-raising increase in equity and bond prices.

Interactions between monetary policy and inequality pose communication challenges. Even if cyclical implications of monetary policy for inequality as measured by the Gini coefficient are small, larger losses or gains for very specific and vocal groups tend to attract media attention. This calls for clear explanations of the advantages and disadvantages of various inequality measures and all possible channels affecting the overall net effect. It also needs to be communicated that current effects are likely to be reversed during the monetary policy tightening cycle and that inequality fluctuations would be much larger without monetary policy intervention.