Brazil: A tale of two industries or how openness to trade matters

Brazil has a large and diversified industrial sector, but while parts of it are thriving, others are facing hard times, in part because they are weakly integrated into the world economy. The automotive and the aircraft sectors are two opposite examples of Brazilian industries – one inward-focused and one fully integrated into global trade.

Brazil is the world’s seventh largest automobile producer, but its automotive industry is currently facing severe challenges and production is declining (Figure 1). The industry is heavily protected from foreign competition and Brazil’s car manufacturers have a strong focus on the domestic market and on local content. Only 15% of the production is exported. Despite being the 8th largest producer of cars in the world, Brazil ranks only 24th in automotive exports. Brazilian vehicle exports have the third-lowest foreign value added content among the 62 countries in the OECD-WTO Trade in Value Added database (OECD, 2015a).

While many foreign producers have set up production plants in Brazil in light of the attractive long-term potential of Brazil’s consumer market, most of them have not integrated their Brazilian plants into global value chains (OECD, 2015b). Possibly due to the low exposure to foreign competition, productivity has fallen sharply behind Mexican car manufacturers, who are fully integrated into global production chains and have achieved remarkable gains in global market share. For example, Mexican plants produce 53 cars per worker and year, as opposed to 27 in Brazil, although the cars produced in Mexico are on average smaller models.

A very different story can be told about Brazil’s aircraft industry. Given that production volumes of airplanes are much smaller than for automobiles, economies of scale mandate that firms in this industry focus on the global market. Embraer, originally created in 1969 as a state-owned company, was privatized in the 1990s and has become one of the top global players in the industry since then. Its initial strategy was largely based on buying almost all components internationally for a final assembly in Brazil, although over time it has started to produce parts itself. As a result of its roots, Embraer has always been strongly integrated into global production chains, and imports still account for 70% of its value added. At the same time, exports have grown steadily, performing significantly stronger than motor vehicle exports (Figure 2). By now, Embraer has become the world’s third largest aircraft producer, and it is the global leader in the 70-130 seat aircraft segment, where it accounts for 60% of global deliveries. 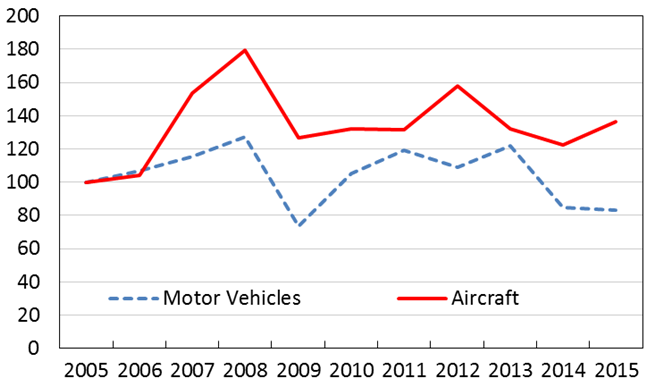