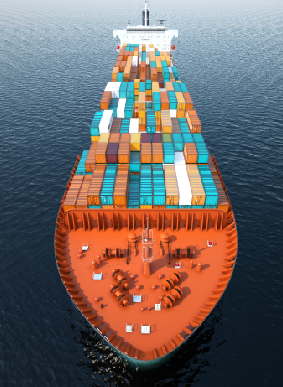 Governments in the OECD and elsewhere must intensify efforts to mitigate pollution levels, if the international agreement of the latest COP 21 – pledging to keep global warming below 2 degrees – is to be more than just a loose promise. Against this background, policy makers need to enforce environmental regulations that oblige firms to account for the impact their actions have on the environment, and increase the price of using the environment as a factor of production. While there is broad support for environmental goals in the first place, support dwindles when compliance with such regulations implies higher production costs.

Efforts to put a cost on pollution have indeed often provoked resentment and resistance by producers and workers who fear to be put at a disadvantage vis-à-vis foreign competitors that are located in jurisdictions with laxer environmental policies. The conventional wisdom that tougher environmental regulations ultimately entail a loss in competitiveness and thus encourage industries to relocate production to a more favorable business environment, is commonly referred to as the “Pollution Haven Hypothesis” (PHH). If real, it can make environmental policy making politically difficult due to voters resistance and ineffective due to leakage. However, in spite of the PHH’s popularity, the evidence behind it is fragmented and to a large extent anecdotal.

The working paper “Do environmental policies affect global value chains? A new perspective on the pollution haven hypothesis” attempts to change this by looking at the Pollution Haven Hypothesis  through a new lens, using trade in value added data that more accurately represents today’s trade flows in the context of internationally fragmented value chains.

Scrutinising data across more and less pollution intensive industries in 23 OECD countries and six emerging economies since the 1990s, we find that countries with relatively stringent environmental laws do not suffer from lower exports as a result (see compare your country data viz) . There is however, a small effect on their relative competitiveness across different sectors in the economy. In countries with more stringent policies, exports of pollution and energy intensive sectors, such as steel-making or chemicals are lower than in the absence of stringent environmental policies (Figure 1). However, this is compensated by a corresponding increase in exports in “cleaner” industries like machinery or electronics. Moreover, both the positive and negative effects of environmental regulations on exports of different sectors have been small so far relative to the effects of other factors, such as market size, globalisation, national endowments or trade liberalisation. 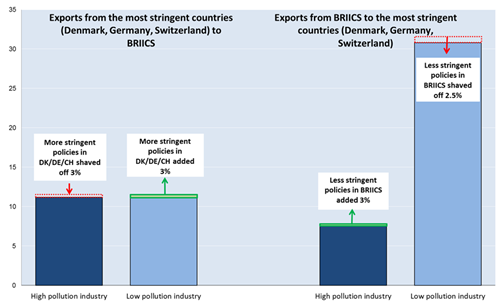 In its preface to the General Theory, Keynes said that “the difficulty lies not so much in developing new ideas as in escaping old ones.” A myriad of ideas on how to credibly reduce the incentives to pollute in the long-term already exists. It remains to escape the archaic belief that ensuring environmental protection while maintaining a strong market position is infeasible. Governments must stand up to the environmental challenge and focus on the good design of environmental policies, accompanying framework policies and on the edge they can get from innovation – in order to secure both good environmental and economic outcomes.