Our Going for Growth report released last week at the margin of the G20 Finance Ministers and Central Bank Governors meeting came out at the time when near-term global growth prospects are again clouded. Emerging-market economies are losing steam, world trade is slowing down and heightened uncertainties are holding back investment in both emerging and advanced economies. Durably weak investment, combined with challenges in the way innovation drives and diffuses throughout our economies, have resulted in slow productivity gains.

Getting back to healthy and inclusive growth calls for comprehensive and coherent policy response, drawing on monetary, fiscal, and structural policies working together: On the one hand, demand policies alone will not restore sustainable growth; but on the other hand, policies to strengthen competition and innovation, spur job creation, and repair financial systems will only yield results if there is enough demand.

The report reviews the main growth challenges faced by OECD countries and major non-OECD countries and takes stock of progress over the past year or so in adopting structural policy reforms to address them. Given the breadth and evolving nature of the growth and inclusiveness challenges facing advanced and emerging economies, the slowdown in the pace of structural reform documented in this report is deeply concerning. While the pace of reform should be accelerating to restore sustainable and equitable growth, it has been steadily declining since 2011-12. In addition, countries with ambitious reform programmes face significant political challenges and the risk of losing momentum. Progress has been made on the G20’s 2104 Brisbane commitment to implement reform strategies to lift their collective GDP by 2 per cent by 2018, but much remains to be fully implemented. 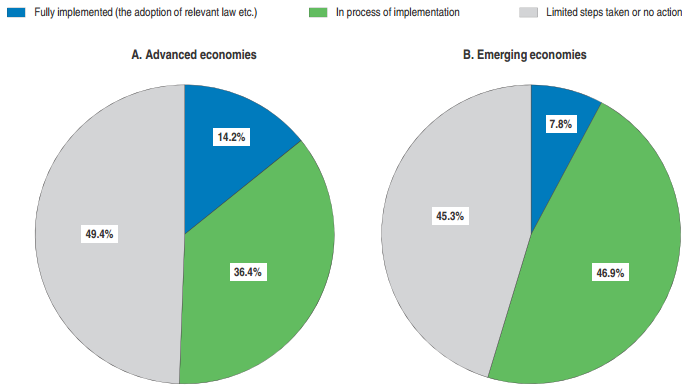 In the current context of clouded prospects and persistently weak demand, it is important that structural reform packages that promote long-term jobs and productivity growth focus as well on maximising short-run gains. The Going for Growth report indeed reviews the issues and evidence on the impact of reforms introduced in a difficult economic conjuncture. The lessons drawn offer valuable insights on the type of reforms most likely to succeed in such circumstances as well as on specific measures to increase the short-term payoff even in a context of weak demand. For example, reform strategies that put more weight on infrastructure spending, on facilitating the entry of new firms in services, or on reducing barriers to labour mobility are most likely to boost activity in the short term, with the support of demand policies and a repaired financial sector. It is important in such a context that all countries contribute collectively to reform efforts and to support demand, lest the prospects of a return to healthy and inclusive growth, both at home and in the global economy, will be pushed further back.